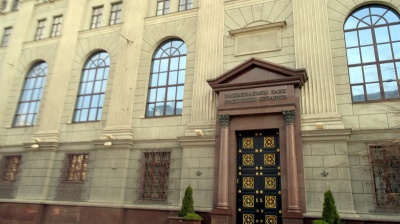 Belarusians have already drained ATMs of dollars, afraid of another deep devaluation of the local ruble, but with money being withdrawn from the sector a financial crisis is now on the cards too.
By Ben Aris in Berlin August 28, 2020

Belarus's political crisis exacerbates risks to its banks' financial profiles, with the initial impact on their funding and liquidity positions, Fitch Ratings said in a report on August 28.

“Deposit outflows have been manageable so far, but we expect deposit volatility to continue in the current political environment, keeping liquidity needs high,” the ratings agency believes.

As bne IntelliNews reported, ATMs in Minsk have already been drained of dollars and the Belarusian ruble (BYN) is tanking. The people fear yet another deep devaluation of the ruble and an economic crisis as a result of the current showdown between protestors and Belarus' self-appointed president Alexander Lukashenko. Belarus’ economy is already highly dollarised but the unrest has lead people to buy even more dollars.

“Belarusian banks are largely deposit-funded (customer deposits were 60% of end-1H20 sector liabilities). At the start of August, banks' reported liquidity ratios were comfortably above regulatory thresholds, enabling them to withstand moderate deposit outflows. Deposits had stabilised in 2Q20 after falling 4% in 1Q (net of FX effects) as the Belarusian ruble (BYN) fell alongside the Russian ruble following the oil price slump. Sector loans grew by just 10bp in 2Q (net of FX effects),” Fitch said.

Popular unrest over this month's contested presidential election has seen deposit outflows resume, reports Fitch, which could destabalise the banking system if it continues.

“Operational data from Fitch-rated banks, which managed about 60% of system at end-1H20 indicates that total outflows of local and foreign currency (FC) deposits ranged from 1% to 6% in the first three weeks of August,” the agency said.

“Interbank ruble liquidity dried up following the election but has been partly eased by the National Bank of the Republic of Belarus (NBRB) providing about BYN1bn (equivalent to 2% of customer deposits at August 1), net of repayments, through its standard instruments. The NBRB has limited its offer of overnight loans until mid-September to avoid further exchange-rate pressure, while further liquidity support is provided through weekly auctions or on a bilateral basis, targeting specific banks,” Fitch adds.

The highly dollarised Belarusian economy is vulnerable to currency shocks. Destabilising banks through withdrawals could spark a financial crisis.

“While inflation appears under control (5.2% in July vs. the “less than 5%” target) despite substantial wage increases ahead of the election and the recent devaluation of roughly 20% year to date, high dollarisation is a financial stability concern, particularly given low reserves of $4.3bn (or 1.2 months of imports). An additional vulnerability lies in the high share of FX in corporate lending (over 50%) and public debt (~80%),” said Elina Ribakova, deputy chief economist with the Institute of International Finance (IIF), in a recent note on the vulnerabilities of the Belarusian economy.

Ribakova was referring to the amount of cash dollars the NBRB has in reserves, but it also has another c$4bn in gold and miscellaneous assets. From the numbers released by the central bank it appears that the NBRB has already burnt through around $800mn of its reserves since the crisis began following the presidential elections on August 9.

“Liquidity risk stems mostly from the possibility that access to foreign exchange is constrained. Client funding is highly dollarised (at end-1H20, 63% of total client funds were in FC, equivalent to $11.6bn) and foreign funding is sizeable at $5.1bn. FC liquidity facilities are not available from the NBRB and its capacity to provide ad-hoc support in FC is constrained by modest reserves. FC refinancing options through external markets are currently uncertain, although we expect Belarusian banks to maintain access to parent and, selectively, to Russian bank funding in 2H20. According to the NBRB, Russian loans provide 47% of external funding,” Fitch said.

The political crisis comes at a bad time for Belarus, which has at least $3bn of debt obligations to meet this year, and every year for the next several years.

The Ministry of Finance issued $1.25bn of Eurobonds in June which improved its position, but the universal condemnation of Lukashenko's heavy handed tactics has in effect cut the country off from the international capital markets for the meantime and it remains unclear how it is going to fund its obligations other than by turning to Russia for help.

“Nevertheless, the sector's external FC-liquidity remains barely sufficient to cover upcoming external maturities, which are particularly high at state banks. Domestic FC liquidity is largely invested in long-term Belarusian sovereign debt (of which banks held $3.6bn at end-June). We believe that the authorities could make some of this liquidity available to state banks, if needed,” Fitch says.

The protests will slow bank growth this year, even assuming a relatively peaceful outcome fairly soon. The political shock comes on top of the blows struck by the coronacrisis and negative effects of the collapse in oil prices that hurt the Russian economy, and that automatically spilled over into the highly dependent Belarusian economy.

“Lending is highly dollarised but borrowers are not effectively hedged, so exchange-rate pressures add to asset quality risks,” Fitch said.

The sector's total capital adequacy ratio amounted to 16.8% at end 1H20, which by regional standards is not too bad – Eastern European banks usually prefer to keep their adequacy ratios at closer to 20% or above to be able to cope with shocks – but Fitch says the current level is “modest” given the asset quality risks.

In the meantime the NBRB is expected to muddle through and relax the prudential rules through to the end of the year, to give banks some time to readjust to the new realities.

“Regulatory forbearance by the NBRB till the end of 2020 should limit increases in loan impairments and associated provisioning charges, and avoid regulatory limit breaches, including for capital. The government's willingness to support highly leveraged, loss-making public sector businesses will also be important for maintaining asset quality,” Fitch said.