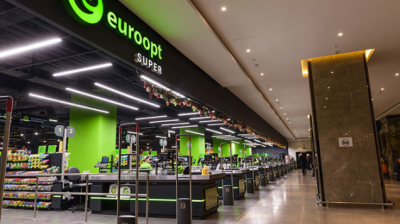 Belarus’ largest food retailer Eurotorg (aka Euroopt) Holding managed to brush off the coronacrisis and put in a decent set of results for the first half of this year that showed only a small decline in revenues in dollar terms, but an increase in local currency terms.

Eurotorg has built up a 19% share of the Belarusian food retail market as of the end of 2019. The company's business was launched in 1993 in Minsk and by the end of June this year, Eurotorg operated 879 stores of various formats (hypermarkets, supermarkets and convenience stores) in the food segment in 325 settlements.

However, the company's revenue in national currency terms increased by 7.5% up to BYN2.6bn. The loss in hard currency terms was due to the depreciation of the BYN, which is down by 20% on the dollar year to date as of September 8. Although the value of the ruble is down, net retail sales in Belarusian ruble terms were up by 6% to BYN2.4bn.

Eurotorg runs a nationwide chain of supermarkets that cater to the general population and has been growing rapidly for years. As it provides two out of ten Belarusians with staple products, its business has been more robust than most and able to weather the worst ravages of the coronavirus (COVID-19) epidemic that has raged in Belarus unchecked.

Like its Russian and Western peers, Belarus' shoppers have increasingly gone online to buy food and drink, where sales got an extra boost. The total revenue of the company's online services increased by 30.8% to BYN141mn ($60.4mn), which is 6% of net retail revenue.

EBITDA increased by 24.1% to BYN195.6mn ($83.8mn). EBITDA margin increased by 1 percentage point to 7.6% due to a reduction in administrative and selling expenses.

The press release notes that the gross margin for the first half of the year decreased by 0.2 pp for a decline of 25%. The company attributed the decline in margins to the expansion of wholesale operations and the effect of the closure of its drug stores.  Net profit fell to 3% largely due to the FX effects. At the same time, the adjusted net profit margin was 2.8%, an increase of 1.6 pp.

Debt ticks up, but remains a golden investment opportunity

As one of Belarus’ most attractive privately owned companies in October 2017 it launched Belarus’ first ever corporate eurobond issue, raising $340mn with a bond that matures in 2022 and pays a coupon of 8.75%.

The company then followed up a year later in October 2018 and attempted to launch a $300mn IPO on the London Stock Exchange (LSE), the country’s first ever public listing. While there was some interest, the offer was withdrawn a month later due to insufficient interest from investors.

While its appeal to London-based investors has been capped, the company is a lot more familiar to Russian investors, and it issued a RUB5bn five-year bond on the Russian securities market in June last year and then followed up with a RUB3.5bn ($52.7mn) syndicated loan facility agreement with a consortium of Russian banks in August.

Eurotorg’s bonds make it the only privately owned tradable security in the country and analysts say the current crisis has created a golden investment opportunity.

"Due to the company's focus on constant optimisation of the loan portfolio," the share of short-term debt remains at a low level of 6.7% of total debt as of June 30, the company said in its press release. “At the same time, the company notes a high liquidity reserve. So as of the reporting date, the volume of undrawn credit lines amounted to about $300mn in equivalent,” Eurotorg added.

"The company showed strong results for the first half of 2020, despite serious challenges in the form of the coronavirus pandemic. Even in these conditions, we were able to continue expanding the store network in accordance with the strategy of low-cost growth, strengthened our leadership in the retail market in Belarus," the company’s general director, Andrey Zubkov, said in the press release.

The general director also commented on the impact of the internal political crisis in Belarus on Eurotorg. “As you know, the situation in Belarus in recent weeks has not been easy, but it does not affect the operation of the chain's stores, and our activities continue as usual,” said the general director, noting that the company intends to “continue to work as usual”.

The official exchange rate for September 8 is BYN2.6665 to the dollar.

The Fischer ski factory in Ukraine must be one of the country’s best kept secrets. Set up in the 40s and employing over 1,000 people, it produces about 60% of all the skis and snowboards that ride the mountains of Europe each season