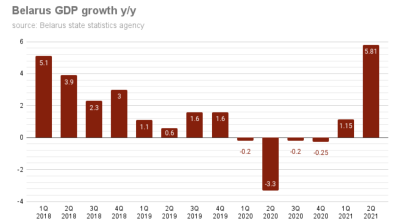 Belarus economy is bouncing back from last year's crisis, expanding by 3% y/y in the first half of this year
By bne IntelliNews October 18, 2021

In January-August 2021 Belarus' GDP rose by 3%, while the foreign trade surplus exceeded $2bn and beat the record of the year 2013, First Deputy Prime Minister of Belarus Nikolai Snopkov said, reports BelTA. Exports are being driven by high food exports.

“On the whole, the economy has been growing on a really quality and balanced foundation this year,” Snopkov said.

In his words, the GDP growth rate totalled 103% in January-August. No GDP decline is projected, the official noted.

After falling into a mild recession last year, GDP growth picked up on a quarterly basis this year, growing by 1.1% in the first quarter and bouncing back by 5.8% in the second quarter, largely on low base effects.

Belarus' merchandise exports rose by 36% in the first half of the year. Foreign currency earnings of Belarusian enterprises totalled $6.5bn. The foreign trade surplus exceeded $2bn. It has not been that high since 2013. “There is a considerable demand primarily for trucks, cars, tractors, furniture and food,” Snopkov added.

In total in January-August 2021 Belarus' export of merchandise and services rose by 32.2% year on year to $30.4bn, according to the National Bank of the Republic of Belarus (NBRB).

Food exports have surged and may total $6bn this year, according to Belarus' Deputy Agriculture and Food Minister Aleksei Bogdanov.

According to Bogdanov, in January-August 2021 Belarus exported $4.1mn worth of agricultural products, up 10.8% y/y. “By the end of the year, Belarusian food exports are expected to exceed $6bn,” he said.

Commenting on a possible impact of European sanctions on Belarus' exports, the deputy minister noted that Belarus had “diversified its foreign trade a long time ago, so that no country would be able to do anything against us”.

Bogdanov added Belarusian food supplies to the EU increased by 43% in the first half of this year. Belarus is now actively exploring the CIS and Asian markets. This year exports to China rose by 40% over the previous year (the export was estimated at $216mn).

The official said: “Certainly, sanctions are having an effect. But a wise Chinese proverb says that any crisis is an opportunity. What are our opportunities? We differently look at the situation. We differently evaluate business processes, export strategies, the ability of enterprises to buy components. In the end we differently evaluate performance of enterprises. All of these factors create a slightly different economic atmosphere, which is geared towards getting profits, export earnings, and respectively salaries instead of the process and gross output figures. This is why the shock of the sanctions has allowed us to reformat our attitude.”

US warns Belarus to keep its commitment to neutrality
Who are the group responsible for last week's hacker attack against Ukrainian websites?
Belarus hackers behind the Ukraine cyberattack, Russia arrests ransomware hacker at US request