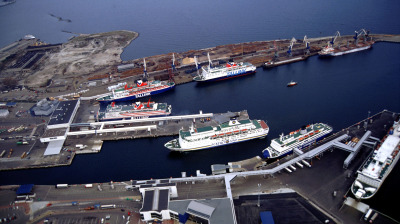 Estonia likes to trumpet its transparent business environment almost as often as it rides its e-economy hobby horse, so a major corruption scandal at the very top of what is one of the country's most important state-owned strategic assets - the Port of Tallinn - is causing waves that threaten to wash away far more than the country's squeaky-clean (and often self-congratulatory) reputation.

On August 26 officers of the Internal Security Service, known by its acronym 'KAPO' - the same outfit that cause celebre Eston Kohver works for - swooped on the offices of the Port of Tallinn (slogan: the Port of Good News) and arrested board members Alan Kiil and Ain Kaljurand. The pair were remanded in custody on suspicion of accepting bribes, charges that they deny.

Their arrests followed the questioning and release a day earlier of six other unnamed individuals in connection with the bribery investigation.

The probe is believed to centre on a rigged ferry tender involving Poland and possibly Turkey. Corrupt practices could extend as far back as 2009, the office of the Prosecutor General said.

The Polish connection was confirmed on September 1 when Poland's Central Anti-Corruption Bureau (CBA) said it had raided offices in Gdansk at the request of the Estonian authorities. "The Central Anti-Corruption Bureau conducted certain activities on August 26 at the request of the prosecutor's office of the Gdansk region," CBA spokesman Jacek Dobrzynski, said, according to Estonian national broadcaster ERR.

And it doesn't stop there. In what looked like pre-emptive action, HTG Invest, a subsidiary of ferry-to-hotels group Tallink, said it had started an internal investigation in connection with allegations that it was involved in paying bribes to Port of Tallinn board members.Tallink is the country's largest private business and a darling of the Baltic stock markets, regularly registering as the most-traded stock on the OMX Baltic lists.

Despite its well-publicised high rankings in ease of doing business surveys and its membership of the Organisation for Economic Cooperation and Development, corruption is by no means unknown in Estonia, and usually comes with the sound of political strings being pulled.

What makes the Port of Tallinn case so interesting is not just the involvement of such a key company or the potential size of the graft  - according to newspaper Eesti Ekspress the bribes amounted to €4.1m, of which Kiil took €3.8m - but that the two people at the centre of the scandal offer perfect representations not only of the old-school political businessman (Kiil) but also the modern, measured, moderate face of Estonian business (Kaljurand).

52-year-old Kiil seems to be straight out of the "How To Make Money In The Post Soviet Space" playbook. A former private businessman and head of Paljassaare Port, his career really took off once he switched allegiance from the populist People's Party to the business friendly Reform Party which has bossed the political scene for more than a decade.

Soon he was chairman of Harku Parish council, where he gained a reputation for his domineering style, even going so far as to call a vote of no-confidence in 2007 in his own administration to show his displeasure with opposition from within the party.

After that, he headed to Port of Tallinn, taking charge of the  procurement contracts while Kaljurand handled most of the day-to-day management of the company.

50-year-old Kaljurand in contrast is the sort of executive you see adorning the covers of business magazines, all rolled up sleeves and manly jaw. Joining Port of Tallinn in 2005 he is big on the need to attract business from China and had big ideas too, even talking about making Tallinn a rival not just for Riga and Helsinki but for Rotterdam.

He lists his interests as "tennis, running and folk dancing". Where Kiil is all confrontation and controversy, Kaljurand is supposedly the strong and silent type with national daily Postimees quoting an insider saying he "skillfully managed to surround himself with obedient soldiers" while, like Kiil, pocketing a salary in excess of €8,000 per month.

That has led to a good deal of soul searching in the Estonian media and above all an uncomfortable suspicion that perhaps the business environment isn't quite as spotless as everyone assumed. Perhaps Estonian business is just as dirty as it is everywhere else - but better at glossing over inconvenient truths in its obsessive quest to be classified as 'Nordic'?

Neinar Seli, formerly a long-serving chairman of the supervisory board of Port of Tallinn, summed up the feeling well in Postimees, reviving speculation about numerous other suspicious transactions: "So far a special audit has been carried out at the Port of Tallinn, but it should actually be conducted in all big state-owned enterprises. What exactly is [energy utility] Eesti Energia doing in Jordan or in the US state of Utah? Money was paid to American lobbyists - who exactly were these lobbyists? " Seli told the newspaper.

The last big embarrassment for Estonia's state-owned sector was the collapse of national airline Estonian Air when a shiny new revival plan penned by a supposed business wunderkind turned out to be the sort of thing a first year business studied student would baulk at, but costing taxpayers around €80mn.

"Where did €80mn of taxpayers' money go? It would be good to know if everything is fine with that," Seli added.

Seli's comments may be apposite but they are also rather late. When former economy minister Juhan Parts suggested as early as 2010 that the Kiil-Kaljurand axis at Port of Tallinn was becoming perhaps too powerful, it was Seli, in his capacity as chairman of supervisory board, who chose to ignore the advice. In 2014 the two Ks had their contracts renewed for another five years after beating off competition from 17 other applicants for their jobs.

Five years on, Parts' fears appear to have been justified. His successor as economy minister, Kristen Michal (from the same Reform Party as Kiil), said on September 2 that he favoured removing politically-connected members from the boards of state-run companies and pressing ahead with privatisation.

"Where the market works and there are no obstacles, then the state should not be a major shareholder in those markets," Michal said, according to ERR.

As for the Port of Good News, with Kiil and Kaljurand both resigning, Marko Raid, current Chief Financial Officer, and Carri Ginter, an attorney, have been appointed as temporary members of the management board.

"We will also shortly announce a public competition for the posts of new members of the management board and make sure that security checks are carried out among the candidates," said Remo Holsmer, the current chairman of the supervisory board.