Attacks on the National Bank of Ukraine escalate 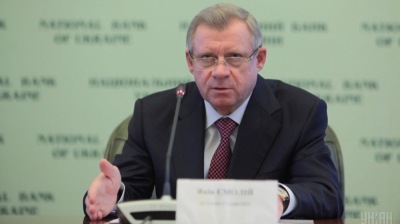 The homes of NBU governor Yakiv Smolii and other top staff were targeted by paid-for protestors / wiki
By Ben Aris in Berlin December 3, 2019

The attacks and intimidation on the National Bank of Ukraine (NBU), allegedly being carried out by oligarch Ihor Kolomoisky, went up a notch on December 3 when protestors targeted the private residence of the governor of the NBU Yakiv Smolii as well as other members of the regulator’s senior staff, according to a press release emailed to bne IntelliNews by the NBU.

“Yesterday and early this morning, the homes of the governor of the NBU, Yakiv Smolii, and his first deputy governor, Kateryna Rozhkova, were targeted by protestors,” the NBU said in a note emailed to bne IntelliNews. “Yesterday, governor Smolii’s home and village were targeted by protesters shouting anti-NBU slogans on loudspeakers. Reporters from the TV channel 1+1, owned by Ihor Kolomoisky, the former owner of PrivatBank, also entered the porch of governor Smolii’s home uninvited.”

The NBU has been under attack by the oligarch, according to a press release on November 26 in which it named the oligarch and in its strongest statement yet accused Kolomoisky of launching a coordinated campaign of terror, intimidation and physical attacks on both the bank’s staff and its independence.

Kolomoisky has been battling the NBU in court, trying to get his former bank PrivatBank denationalised, or at least to persuade the government to pay him $2bn in compensation.

Former NBU governor Valeriya Gontareva has also come under attack and also blamed Kolomoisky for being behind the attacks on her and her family. Gontareva was knocked down and hospitalised by a driver in London, where she now lives, in an incident the police are treating as “suspicious”. Then Gontareva’s house was burnt down in an arson attack on September 16. Her daughter-in-law’s car was also tourched and police broke into her Kyiv apartment in connection with an investigation.

However, it appears the rosta of victims has now been widened to include the current senior staff of the NBU. On the morning of December 3 more protestors targeted Rozhkova’s home, also shouting anti-NBU slogans. Both Rozhkova and her daughter were at home at the time, and it caused them to fear for their personal safety. The police were called and the protesters dispersed, the NBU said in its note to bne IntelliNews.

“These so-called protests represent a clear escalation in the threat level to the NBU. For the first time, current NBU employees and their families, including the governor himself, have been subjected to intimidation and terror at their homes,” the NBU said.

The NBU formally accused the protestors of being paid for, a charge it levelled at protestors that broke into the bank’s foyer last week to protest against the governor and senior staff.

“Terror and pressure on the NBU – the institution, the board, and the collective staff – is continuing,” the NBU said. “[The NBU] is outraged at how paid ‘organisers’ of such rallies distort the democratic right of citizens to freedom of speech and free expression of their views, in the service of certain business interests.”

The statement also alluded to the previous statement last week that named Kolomoisky. "We believe that this pressure on the National Bank is carried out by the oligarch and ex-owner of PrivatBank Ihor Kolomoisky, who owed the state $ 5.5bn withdrawn from PrivatBank before nationalisation.”

The showdown between the NBU and Kolomoisky has become a major political headache for Ukrainian President Volodymyr Zelenskiy. A team from the International Monetary Fund (IMF) were in Kyiv in November for a second time since Zelenskiy’s administration took over to negotiate a new Extended Fund Facility (EFF). However, for a second time the IMF team left the Ukrainian capital empty handed, citing worries over the NBU’s independence and the possibility of the return of PrivatBank to Kolomoisky – a red line for the fund, Ukraine’s biggest donor.

The IMF has demanded that Zelenskiy’s government seek the return of some $15bn stolen by owners of bank, many of which were closed during the clean-up of the sector spearheaded by Gontareva, including the $5.5bn that was looted by Kolomoisky from PrivatBank – a call echoed by the NBU.

“The president, the government, and the NBU – stand united in the call on the debtor to repay these funds. The purpose of the assault on the NBU is to create a chaos of information in order to: discredit the NBU and reform the banking sector, change leadership, and resort to the manual management of the NBU in the future; avoid responsibility and obligation to return money siphoned off from PrivatBank; and interfere with Ukraine’s cooperation with international partners and, above all, the IMF, which supports the state’s position that former owners of bankrupt banks must repay what they owe the state,” the NBU said in its statement.

The NBU board of directors went on to detail various facts that it claims proves the protestors at the houses of NBU staff in the last two days were a provocation orchestrated by Kolomoisky:

“First, protestors at the walls of the NBU, according to the media reports, are paid to take part in protests. The organiser of the mentioned public events is an NGO called Stop Corruption that was expelled from the Global Investigative Journalism Network (GIJN) based on lack of professionalism and a conflict of interest.

“Second, on 25 November employees of the Nikopol Ferroalloy Plant and other companies controlled by Ihor Kolomoisky joined the protests, who previously held a rally outside the PrivatBank offices in Dnipro and Kyiv.

“Third, this attack is carried out through the main driver, MP Oleksandr Dubinsky, who has been under investigation for corruption and known in media as the mouthpiece of oligarch Kolomoisky. Negative statements and slander, demands and expectations of the protesting parties are vocalised by the information sources owned or associated with Dubinsky.

“Exerting pressure on the central bank is unacceptable in a legal and civilized state. We continue to work to ensure price and financial stability – we regulate banks, provide continuous payments, accumulate international reserves of Ukraine etc. However, since such attacks may threaten the streamlined operation of the regulator and the safety of our employees, the NBU has referred to the law enforcement requesting prevention of illegal actions.

“Despite the pressure we continue to stand by the joint premise: the former owners of banks should take responsibility for siphoning off customer deposits and leading banks to bankruptcy. We urge the media and expert community to support the NBU through non-biased coverage of events,” the NBU said in its statement.