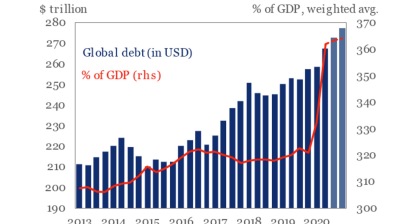 The coronacrisis has sent already record high levels of global soaring to giddying new levels, reports the Institute of International Finance (IIF) in a note released on November 18. 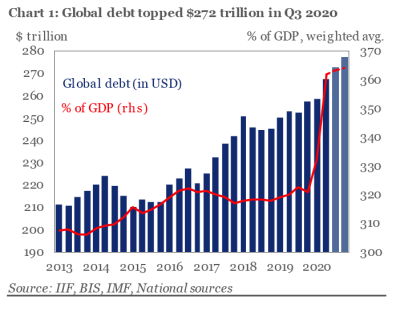 “Spurred by a sharp rise in government and corporate borrowing as the COVID-19 pandemic wears on, the global debt load increased by $15 trillion in the first three quarters of 2020 and now stands above $272 trillion. With little sign of a slowdown in debt issuance, we estimate that global debt will smash through records to hit $277 trillion by the end of the year,” Emre Tiftik, director of Sustainability Research, and Khadija Mahmood, associate economist of IIF, said in the note.

Most economists have become more sanguine in the last few weeks as a rash of vaccine clinical trial results have been released as the Phase III trials draw to a conclusion. The circa 90% efficacy of all the leading candidates is very encouraging, as the US FDA usually demands only a 50% efficacy to certify a vaccine and the EU 75%, so the 90%-plus efficacies being reported suggest the new anti-coronavirus (COVID-19) vaccines are very effective. That means the pandemic may fade rapidly in the first quarter of 2021 and lead to a huge boost to the global economy as a year’s worth of pent up demand is released. It also means borrowing should fall off significantly.

Debt ratios should stabilise after a sharp surge in 2020, according to IIF: “Following a record surge in global debt-to-GDP (from 320% to around 362% in H1 2020), the rise in the third quarter of 2020 was more modest, at less than 2 percentage points – helped by the strong global recovery. We expect that the global debt-to-GDP ratio will reach some 365% of GDP in 2020.” 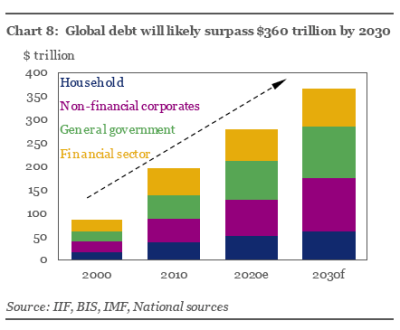 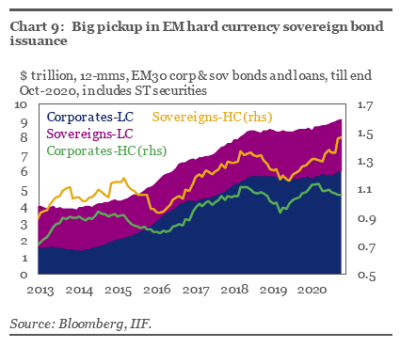 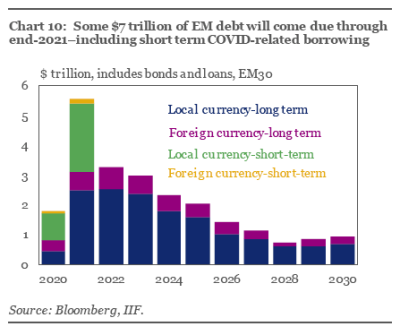 The surge in borrowing has been led by the Developed Markets (DM), which saw debt surpass 432% of GDP in in the third quarter of 2020, up by half from a year earlier. The US accounted for nearly half of the rise, with total debt on track to hit $80 trillion in 2020 – up from $71 trillion in 2019, IIF reports.

Most of the EM debt is dollar-denominated and worth $76 trillion, although countries like Russia have moved to reduce the share of dollar-denominated debt and have been trying to promote the settlement of international trade contracts in other currencies.

Most of the rise was driven by a surge in non-financial corporate debt in China. Excluding China, the dollar value of EM debt declined from $31 trillion in the fourth quarter of 2019 to $29.3 trillion in the third quarter of 2020. The fall in the debt had more to do with exchange rate dynamics and widespread devaluations vs the dollar than to deleveraging in EMs. 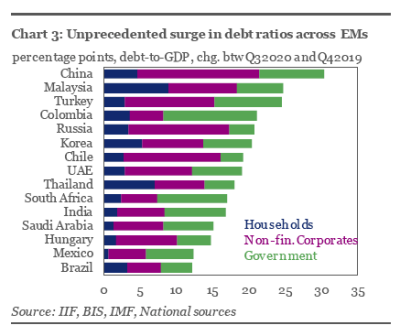 Governments accounted for 60% of the $12 trillion build-up in the world’s debt pile outside the financial sector, with corporates accounting for another $4.3 trillion to reach a fresh all-time high of near $80 trillion. In addition, household debt rose by $500bn to almost hit $50 trillion.

The most active borrowers are also some of the world’s biggest economies: Canada, Japan and the US have seen the biggest increases in non-financial sector debt this year, reports IIF, with the rise in debt-to-GDP ratios varying from 45 percentage points in the US to over 75 percentage points in Canada.

Most of the DMs have long since smashed through the Maastricht criteria of capping debt-to-GDP levels at 60% of GDP and many of Europe’s governments are already at double this level. However, with global interest rates at near-zero levels money is effectively free and so this debt can simply be rolled over ad infinitum.

“Across mature markets, government debt has again been the main driver of the rise, increasing the most in Canada, Japan, the US, the UK and Spain. Of note, Ireland is the only country in our sample to see a decline in the total debt ratio, as declines in household and non-financial corporate debt offset the rise in government debt,” IIF said. “Lebanon, China, Malaysia and Turkey have seen the biggest increases in non-financial sector debt ratios since 2019 amongst EMs. While sharp economic contractions drove surging debt ratios in many cases (notably in Lebanon), the dollar value of debt also rose sharply in China, Egypt, Saudi Arabia, the Philippines and Turkey over the first three quarters of 2020. The rise in non-financial corporate debt in China – from 150% of GDP in Q3 2019 to over 165% in in the third quarter of 2020 – has been striking. We estimate that China’s total debt-to-GDP topped 335% of GDP – vs 200% of GDP in 2011.”

The soaring debt will present EMs with debt servicing burdens that are already starting to appear. As bne IntelliNews reported, the first problem of the newly installed Kyrgyz government will be how to deal with its debt to China. While Russia doesn't have any debt at all at federal level, its regions are close to bankruptcy as they struggle to absorb the economic shock caused by the coronacrisis.

“With short-term debt securities accounting for over 45% of total issuance in mature markets, lower policy rates have also slashed borrowing costs for governments – a big benefit given widespread COVID-related revenue losses,” says IIF. “In emerging markets, however, these revenue losses have made [the] debt service burden much more onerous –despite the benefit from lower borrowing costs. We estimate that some $7 trillion of EM debt will come due through end-2021, with dollar-denominated debt representing 15% of the total.” 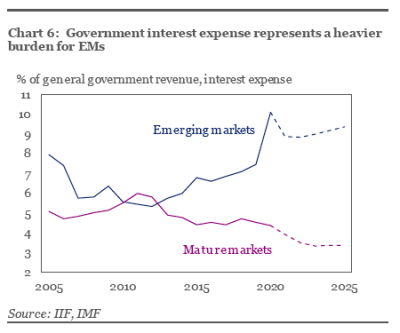 The pace of global debt accumulation has been unprecedented since 2016, increasing by over $52 trillion. While some $15 trillion of this surge has been recorded in 2020 amid the COVID-19 pandemic, the debt build-up over the past four years has far outstripped the $6 trillion rise over the previous four years and over earlier comparable periods, reports IIF.

“As a result, there is significant uncertainty about how the global economy can deleverage in the future without significant adverse implications for economic activity. The next decade could bring a reflationary fiscal response, in sharp contrast to the austerity bias in the 2010s,” says IIF.

“If the global debt pile continues to grow at the average pace of the last 15 years, our back-of-the-envelope estimates suggest that global debt could exceed $360 trillion by 2030 – over $85 trillion higher than current levels,” IIF warns.

Poland ups the ante in feud with Brussels over judiciary reforms
7 hours ago
What's the current outlook for Belarus' export sector?
1 day ago
Russian gas exports to Europe tumble in June
1 day ago
Can we trust Russia’s economic statistics?
3 days ago
LONG READ: Is Russia’s economy headed for 'economic oblivion', as a report from Yale says?
3 days ago