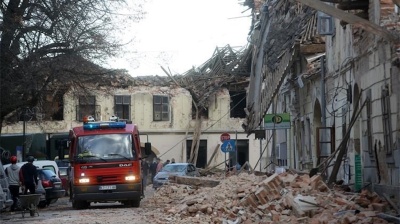 At least seven people were killed in an earthquake that struck central Croatia on December 29.

The quake adds to the pressure on Croatia that is still recovering from another deadly earthquake in Zagreb back in March. The country was also one of the worst-hit by the coronacrisis in 2020.

The epicentre of the magnitude 6.4 earthquake was in Petrinja, central Croatia, where a 12-year-old girl was killed. Five more deaths were reported in the nearby town of Glina and another in Zazina, while numerous injuries were reported in Sisak.

The mayor of Petrinja Darinko Dumbovic said that around half the town of 20,000 people had been destroyed, according to newswire reports. Footage from the town shows collapsed buildings and streets full of rubble.

"There is general panic, people are looking for their loved ones,” Dumbovic told broadcaster N1.

The quake struck at 12.19 local time at a depth of 10km, according to the GFZ German Research Centre for Geosciences. A second tremor followed around an hour later and aftershocks continued through the day.

The previous day, a smaller earthquake with its epicentre north of Sisak was recorded.

The December 29 quake was felt in a dozen countries in the region, state news agency Hina reported.

Slovenia’s nuclear power plant, which is around 100 km from Petrinja, has been temporarily shut down as a precautionary measure.

The deadly earthquake came just nine months after an earthquake close to the Croatian capital Zagreb destroyed buildings in the city during the coronavirus (COVID-19) lockdown in March.

Prime Minister Andrej Plenkovic visited Petrinja on December 29 and warned citizens that most of the buildings in the town centre are unstable.

500 beds have been set up at the barracks in Petrinja to accommodate people who cannot stay in their homes, and another 100 are available at the Hotel Topusko, a government statement said. Additional funds will be made available to help those made homeless by the quake.

On December 31, Finance Minister Zdravko Maric said that HRK120mn (€16mn) would be paid on that day to the areas struck by the earthquake. He added that he did not know if the reconstruction of the Sisak area after would be covered by the Zagreb post-quake reconstruction law or if a new law would be drawn up.