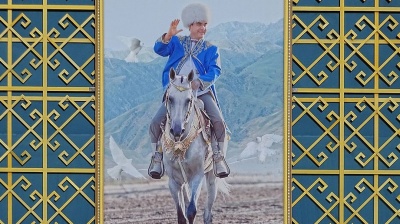 It’s the rumour that won’t go away—and the apparent decision of Turkmen authorities to start detaining individuals accused of spreading it appears to be giving it new legs.

Speculation that Turkmenistan’s President Gurbanguly Berdimuhamedov has died—or is in poor health—began back on July 6 after the autocrat failed to appear in public on that day and the previous day, when EU foreign policy chief Federica Mogherini visited Ashgabat. Officials have ever since attempted to suppress the rumour and their denials that the president had passed away took on new plausibility on July 24 when Uzbekistan’s presidential press service reported that Berdimuhamedov had called President Shavkat Mirziyoyev to wish him a happy birthday.

However, according to opposition-run foreign-based news website Chronicles of Turkmenistan, Turkmen officials remain concerned at the situation and this week at least three people were detained in Lebap Province. A staff member of the province’s water economy department, an employee of the Lebap Velayat office of Turkmentelecom and a female employee of the local public utilities office, and possibly others, were reportedly picked up for allegedly disseminating the rumour of the president’s death.

“Combat alert mode”
Law enforcement agencies in Ashgabat and in the provinces have also been placed into a “combat alert mode”, the report said. The culture ministry, meanwhile, has been charged with the task of carrying out a counter-propaganda campaign.

Such behaviour by the government is only likely to further spark speculation about the state of Berdimuhamedov’s health and gossip that officials wish to cover up the situation while a transition to an agreed successor is arranged.

Turkmenistan's state news agencies are normally full of reports about Berdimuhamedov’s day-to-day activities as the president and his officials push a colourful personality cult. But the stream of reports has come to a rapid halt this month, adding further fuel to the belief that the president might be dead after all.

Former dentist who is “Arkadag”
Berdimuhamedov, a former dentist, has served as president since February 2007. He turned 62 at the end of June.

Using the honorific title “Arkadag”, meaning “Protector”, he is known for appearing on Turkmen state TV giving performances of songs he has written and DJing.

Despite economic difficulties in recent years that have even led to passport-based bread rationing and extraordinary measures to thwart Turkmen attempting to flee poverty in the country, he is known for vainglorious projects such as the building of a multi-billionaire-dollar falcon-shaped airport and the creation of a designer golf course in Turkmenistan, where hardly anybody plays golf.