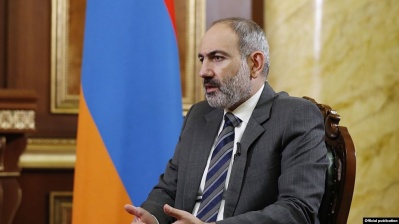 Armenian Prime Minister Nikol Pashinian has announced that he has signed an agreement with Russia and Azerbaijan to end the war over the Nagorno-Karabakh enclave starting from 01:00 local time on November 10.

Pashinian’s announcement, which he said was an “incredibly painful” decision for all Armenians came hours after Azerbaijan posted video footage which appeared to confirm its forces had captured the Nagorno-Karabakh city of Shusha (a mountain citadel called Shushi in Armenian), lending credibility to reports that Azerbaijani troops were now also approaching the region’s main city, Stepanakert, regarded as the capital by the ethnic Armenians who control the self-proclaimed republic still internationally recognised as part of Azerbaijan. It was confirmed that as expected Russian peacekeeping troops will be deployed to keep the truce intact.

In a Facebook post announcing the agreement, Pashinian said he had signed a statement with Russian President Vladimir Putin and Azerbaijani President Ilham Aliyev on the “termination” of the six-week-old war.

“I made this decision as a result of an in-depth analysis of the military situation and an assessment of the people who know it best,” he said.

He added: “This is not a victory but there is not defeat until you consider yourself defeated. We will never consider ourselves defeated and this shall become a new start of an era of our national unity and rebirth.”

Arayik Harutyunyan, leader of the Nagorno-Karabakh breakaway region, said on Facebook that he gave agreement “to end the war as soon as possible”.

Pashinian said he would provide more information in the coming days, adding that the agreement was “the best possible solution for the current situation”.

Azerbaijan’s president, Ilham Aliyev, who said the agreement amounted to a "capitulation" by Armenia, took part in a televised online meeting with Russia’s president, Vladimir Putin. “The signed trilateral statement will become a [crucial] point in the settlement of the conflict,” Aliyev said.

Putin said in a statement that he would deploy peacekeepers along the front line in Nagorno-Karabakh following the agreement to stop fighting. He said he hoped the deal “will set up necessary conditions for long-lasting and full-scale settlement of the crisis over Nagorno-Karabakh”.

In another breakthrough for Azerbaijan, the deal to end the war is expected to lead to the establishment of two road corridors. While one corridor is to lead from Armenia to Nagorno-Karabakh, the second corridor would connect the Azerbaijani exclave of Nakhchivan—which borders Armenia, Turkey and Iran—to Baku, potentially bringing meaningful economic benefits.

Up to 100,000 of the territory’s 150,000 people are thought to have been displaced by the conflict, with both sides accusing each other of indiscriminate shelling of civilians.

November 9 also saw Azerbaijan apologise to Moscow after its forces shot down a Russian helicopter over Armenia, killing two Russian servicemen and injuring a third.

It is not yet possible to make an accurate assessment of the death toll caused by the conflict but Moscow lately put the figure at around 5,000.