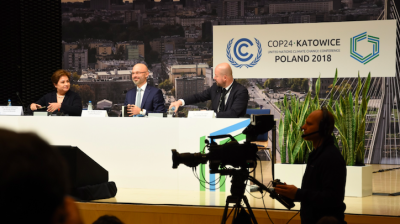 The Katowice summit is now entering what likely seems a tense second week following technical work of countries’ negotiators in the past seven days.
By Wojciech Kosc in Katowice Poland December 10, 2018

The US, Russia, and other oil producing countries blocked consensus over the adoption of a key scientific report on global warming during the United Nations’ climate change summit currently underway in Katowice, Poland.

The lack of consensus highlighted just how divided the world is over what scientists agree is the single most important issue of our time.

“If we don’t take action the collapse of our civilisation and the extinction of much of the natural world is on the horizon,” British naturalist and broadcaster Sir David Attenborough told the summit last week.

The drama concerned just one word. The US, Russia, Saudi Arabia, and Kuwait objected to the “welcoming” of a report by the Intergovernmental Panel on Climate Change (IPCC), which said earlier this year that radical and unprecedented action is needed to limit global warming.

The opposing countries said they could merely “note” the report, which set off frantic informal talks that failed to reach consensus, however.

It is now up to politicians to try and take the issue further, as the Katowice summit, known as COP24, is now entering what likely seems a tense second week following technical work of countries’ negotiators in the past seven days.

Haggling over the IPCC report is but one of the issues that still divide COP24.

The summit’s top task is to come up with rules for implementing the 2015 Paris Agreement, in which the world’s nations agreed to try and limit global temperature rise to below 2 degrees Celsius, relative to the pre-industrial era, by 2100.

COP24 is to come up with a rulebook detailing how that could be achieved in a way that is transparent, accountable, and taking into consideration countries’ different, mostly economic, capabilities.

Agreeing the rulebook is a complicated political process, however, beset with extra disagreements between the rich and the developing economies.

The fundamental divide is over demands of the poorer nations that the developed world provides financing to help them cope with the effects of climate change. The dispute goes back to the issue of historical responsibility of the developed world for the accumulation of greenhouse gases in the Earth’s atmosphere that kicked off the warming now affecting the entire globe.

The IPCC report said in October that a 2-degree warming would set off major and drastic changes to the world’s weather, impacting agriculture, speeding up degradation of the environment, and forcing mass migration from regions too hot to live in.

To avoid that, the report said, humanity needs to cut its greenhouse gas emissions by as much as 45% in only 11 years, by 2030.

The world’s countries have been developing their national plans to limit emissions but climate science says the plans are merely a fifth what must be done in order to meet the goals of the Paris Agreement.

Current ambitions to cut emissions put the world on track to a most likely catastrophic warming of 3 degrees Celsius by 2100.

On top of that, the rise of populists has threatened the earlier unity – however frail – over the need to tackle climate change. US President Donald Trump and Brazil President Jair Bolsonaro are both against the Paris Agreement.

French President Emmanuel Macron has, in turn, faced rebellion in the streets after a proposal to increase tax on fuels sparked weeks of violent protests.

Egypt has got off lightly so far in the coronavirus pandemic