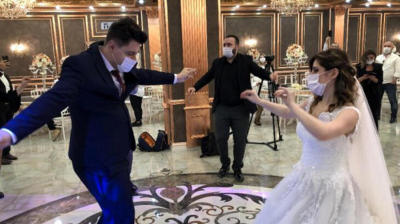 Health minister Koca has blamed weddings for the second peak of the COVID-19 outbreak in Turkey.
By Akin Nazli in Belgrade September 3, 2020

Overwhelmed doctors in the Turkish capital have started referring to Ankara as “Wuhan”, the original epicentre of the coronavirus (COVID-19) pandemic that spread around the world from China.

“Ankara has become Wuhan. A 10-14-day lockdown should be imposed. Health capacity may be exceeded. All closed hospitals should be opened. Private health care units should be opened for pandemic. It’s wrong to leave it to people’s initiative,” Mustafa Cankurtaran, a geriatrics professor at the Hacettepe medical faculty in Ankara, wrote on September 2 in a tweet.

Professors at Hacettepe have lately taken a more strident tone in calling on the government to step up efforts to address Turkey’s coronavirus outbreak. It should be noted that the situation with infections and exhausted medical facilities is no better in other parts of the country, but problems on the periphery or outskirts of Turkey’s less well-known major cities do not grab the same level of attention.

Double the rate of Istanbul

On September 2, Turkey’s health minister Fahrettin Koca said Ankara has experienced the most rapid rise in COVID-19 cases lately, with new cases running at around double the rate of largest Turkish city and commercial capital Istanbul, once the obvious virus epicentre in Turkey. Koca spoke after meeting with the science council fighting the pandemic.

“We are going through the second peak of the first wave of coronavirus. Carelessness at weddings and during religious holidays has brought us to this point,” the minister added, while stressing that lockdowns to curb the outbreak were not on the government’s agenda right now.

On August 31, bne intellinews reported Sinan Adiyaman, head of the Turkish Medical Association (TTB), as saying intensive care units (ICUs) in many Turkish hospitals were full and doctors at some hospitals in the southeastern city of Diyarbakir were plainly having to choose which coronavirus patients in a critical condition to admit into their ICUs for a chance of survival. Even in Ankara, intubated patients, who should be in ICU beds, were being kept on stretchers, according to Adiyaman.

At the weekend, the mayors of Istanbul and Ankara accused the government of playing down the scale of the pandemic, citing local data on infection rates in their cities. The official figures presently show the number of infections nationwide rising at around 1,500 per day, but local officials were last week talking of Ankara alone logging more than 1,000 new cases with each passing day.

With concern about the Ankara situation mounting, there are some signs that the government has started to show some awareness of the situation in public. It has begun opening departments in hospitals in the capital that were shut down in order to direct patient flows to the city’s newly-built mega hospital. Critics say such huge hospitals have become the leading "giant blackhole projects" in government infrastructure spending as they prove impractical for patients who received better care at smaller hospitals within, or near to, their local communities.

TTB representatives said they have finally managed to get an appointment with Koca and that it would take place on September 3. They have been asking the minister for a meeting for several months.