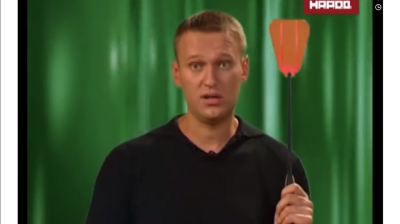 The human rights organisation Amnesty International has rescinded its decision to grant “prisoner of conscience” status to jailed anti-corruption activist and opposition politician Alexei Navalny due to his previous racist remarks and “hate speech” that he has refused to recant when challenged after rising to prominence.

Amnesty said that the opposition politician’s past statements deriding migrants from Central Asia and the North Caucasus constitute hate speech. Famously at the start of his public career Navalny made a video where he likened immigrants from countries on Russia’s southern border to “cockroaches” and recommended “squashing them.”

When he ran for the office of Moscow mayor, part of his platform was to expel all illegal immigrants from the Caucasus from the capital.

The founder of Yabloko gave a TV interview shortly after Navalny was arrested, and rather than supporting him, as the leading member of the “non-systemic opposition,” denounced Navalny, likening him to the fascists.

Navalny fits the strict definition of prisoner of conscience, which is someone that is jailed on the grounds of holding political views that are unacceptable to the government, Amnesty has caused controversy amongst those opposed to Russian President Vladimir Putin’s regime for withdrawing its support for Navalny.

However, Navalny has always refused to recant or apologise for these views, which are widely held amongst Russian nationalists and which form the backbone of this domestic base.

When interviewed by the Guardian a few years later he was explicitly asked to refute these views and refused.

“Yes, we will no longer use the phrase ‘prisoner of conscience’ when referring to [Navalny], insofar as our legal and political department studied Navalny’s statements from the mid-2000s and determined that they qualify as hate speech,” Artemyev told Mediazona, as cited by Meduza. “Nevertheless, our calls for his immediate release remain in force, as he is being persecuted for purely political reasons.” 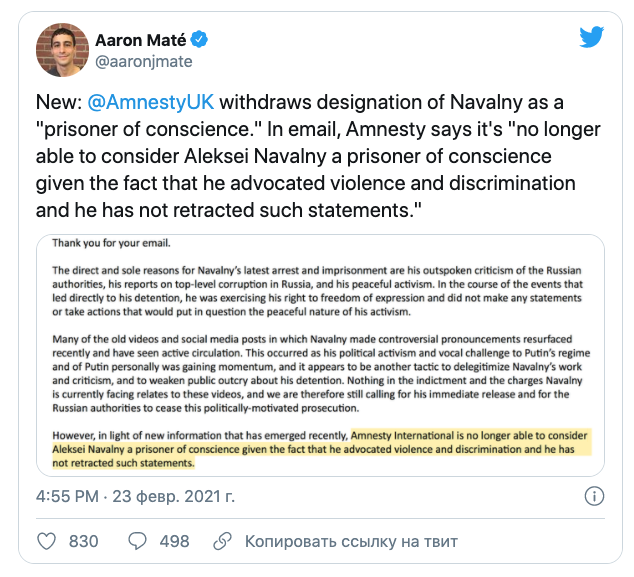 Amnesty International recognised Navalny as a prisoner of conscience on January 17, just after he returned to Russia and was immediately arrested on the border.

“Alexey Navalny has been deprived of his liberty for his peaceful political activism and exercising free speech. Amnesty International considers him a prisoner of conscience and calls for his immediate and unconditional release,” the organisation said in a press release at the time.