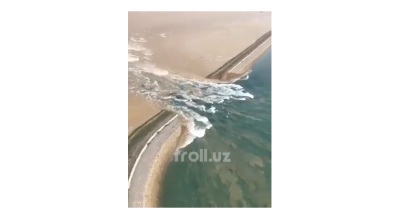 The Sardoba dam in Uzbekistan burst on May 1 and has caused almost a billion dollars of damage. / wiki
By bne IntelIiNews May 6, 2020

Dramatic video released on social media shows the moments shortly after the Sardoba dam burst in Uzbekistan, flooding nearby villages and causing nearly a billion dollars' worth of damage.

Uzbekistan and Kazakhstan evacuated 70,000 and 5,400 people, respectively, from the Syr Darya river basin after the dam burst on the Uzbek side of the reservoir on May 1 just before 06:00 local time, when heavy rains and stormy winds caused the Sardoba dam wall to partially collapse. Officials warned that the dam was critically weakened and could crumble altogether, but that workers had been dispatched to shore it up.

A total of 22 Uzbek villages and four Kazakh villages were affected by the flood.

The Uzbek government sent in the army to try to divert the water flow to a local lake and provide humanitarian aid to those displaced by the tragedy.

The Sardoba Reservoir was completed in 2017 following seven years of construction work that took place under the supervision of current Uzbek President Shavkat Mirziyoyev, who was the prime minister at the time.

The General Prosecutor’s Office said on May 3 that they have filed criminal proceedings over the incident for suspected violations of safety precautions during construction of the reservoir.

The damage caused by flooding in the Turkestan region of Kazakhstan as a result of the Sardoba dam bursting in the Syrdarya region of Uzbekistan is preliminarily estimated at more than 404mn tenge ($951,500), regional governor Umirzak Shukeyev said at a government meeting, BaigeNews reported.

"We are still calculating the caused damage and will provide the update on the situation soon. The compensation for flooded houses will be provided like that in Arys. We should provide compensation to each family. Eight posts were set up and 303 police officers were mobilised to safeguard the properties in flooded areas and to prevent looting," Umirzak Shukeyev stated.

Emergency services personnel have so far evacuated 70,000 residents to safer ground. Media showed images of helicopters rescuing people trapped on their roofs by the rising water. Although nobody is believed to have died in the flooding, at least 56 people are being treated for injuries at hospitals, reported Eurasianet.

Mirziyoyev killed when they were carried away by a mudflow as they were crossing a bridge on their way to the shops.

Sardoba reservoir is 29 metres deep and designed to hold up to 922mn cubic metres of water. Construction began in 2010 during the rule of the late president Islam Karimov.

The reservoir was intended to provide irrigation to farms in the Sirdaryo region, but there were also many other plans for taking advantage of the infrastructure.

At the end of April, construction started on a small hydroelectric power station (HPP) funded with $23.6mn in loans from Russian lender Roseximbank. The plant was said to be due for completion by 2022.

Ukraine will receive $5.5bn in support from the US later this month
11 hours ago
John Malkovich to turn Skopje into Hollywood of the Balkans
11 hours ago
Envoy says start made on construction of Turkish attack drone factory in Ukraine
21 hours ago
Huge explosion rocks Russian airbase on the Crimean peninsula
1 day ago
Russia cuts oil flow via Ukraine's Druzhba pipeline, blaming sanctions for blocking transit payments
1 day ago