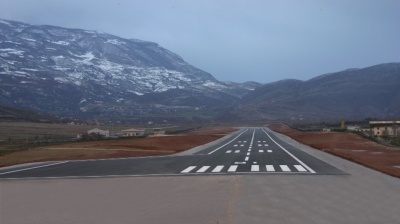 The idled airport in the northern Albanian city of Kukes is expected to start operations by this autumn, Prime Minister Edi Rama said on April 6.

Albania’s air transport sector is on the verge of opening up. Tirana International Airport’s exclusive rights to international flights was cancelled in 2016 and there are now plans to turn a reopened Kukes airport into a low cost airport, as well as for the construction of a new airport in Vlora.

Kukes will mainly offer low-cost flights and will be the second operational airport in the country.  “I am very optimistic that the airport will start operating in autumn,” Rama said during a conference call with members of the Kukes local authorities.

The new airport is expected to contribute to the development of one of Albania’s poorest regions which was recently hit by violent protests over the introduction of a toll system on the motorway to Kosovo, which runs through the region. Rama’s call with local officials mostly focussed on the road toll, but he also elaborated on plans for the airport’s reopening.

“It is impossible for low cost carriers to come to Tirana airport due to the concession rights, which allows the airport to set high prices," he said, adding that Kukes residents living abroad and all Albanians “rightly complain about high ticket prices”.

To date Albania has been largely excluded from the mass expansion of low cost airlines into Central and Southeast Europe, but companies including WizzAir have expressed an interest in expanding into the country.

Albania also plans to build an airport in Vlora, which will be 100% funded by private investments. The government has concluded a contract with a Turkish tie up for the construction of Vlora airport worth €100mn.

The construction is expected to start later in 2018, and when completed it will be the most modern airport in Albania. It will help to boost the tourism sector in the southern part of the country.

The government is also completing a feasibility study for the construction of a small airport in southern coastal city Saranda.

Rama's government promised new airports would be built in Albania after the exclusive rights over international flights held by Tirana airport were removed.

Germany will finance the initial phase of the Green Infrastructure in Tirana project with a €50mn loan, according to a statement from the German embassy in Tirana.  The project aims to ... more