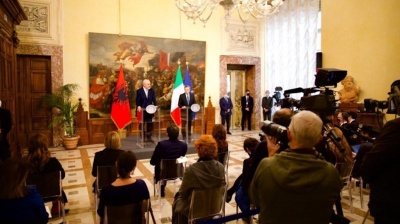 Italian Prime Minister Mario Dragi indicated during a joint press conference with his Albanian counterpart Edi Rama that he does not favour decoupling Albania’s progress towards EU accession with that of its neighbour North Macedonia.

Currently the progress of both countries is stalled because of Bulgaria’s veto on the start of accession negotiations with North Macedonia, imposed when the previous Bulgarian government sought to wring concessions out of Skopje over bilateral language and historical issues.

“The integration of the Western Balkans is a process that sees countries all together,” Dragi said on November 17, when asked about a potential decoupling of the two countries.

“We must consider that the integration of Northern Macedonia is also important. What are the steps that Italy will take, today it is too early to say. These will be concretely overcome hand in hand as Bulgaria's integration process continues.”

The Italian prime minister added that he is “generally optimistic” but pointed to the lengthy accession process of the first wave of accession candidates from Central and Eastern Europe.

Rama described Albania’s stalled progress as the “strangest collateral damage imaginable” of the dispute between Bulgaria and North Macedonia.

“Then the issue of the separation of Albania from Northern Macedonia, today is an issue that is too early to discuss because there were elections in Bulgaria, we have to wait for the new government, we have to wait for the new president of Bulgaria and we will see what position the new government in Bulgaria and the new parliamentary majority will hold,” he added.

Bulgaria held general and presidential elections on November 14. However, the presidential election will now go to a second round, while parties have not yet struck a coalition deal following the general election. The most likely formation is a broad coalition led by the reformist Change Continues, which would be more inclined to unblock North Macedonia’s EU progress than the previous government led by populist Gerb and comprising several small far-right parties.

Earlier this month, the Netherlands’ Prime Minister Mark Rutte visited both countries as diplomatic efforts are stepped up ahead of the upcoming EU Council meeting. After meeting Rama in Tirana, Rutte commented that Albania had “made the right amount of progress”.

Previously the Netherlands had been one of the EU countries that had been least enthusiastic about Albania’s progress with accession, but at the meeting he indicated it was only the Bulgarian veto now holding back the start of accession talks and the scheduling of Inter-Governmental Conferences with the two Western Balkan countries.