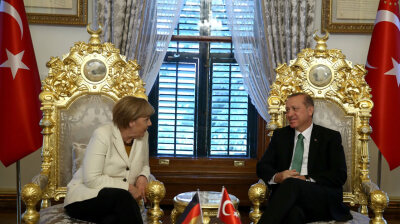 Angela Merkel signed a “great”—but illegal according to European legislation—refugee deal with Turkish President Recep Tayyip Erdogan. Will “grey passport” arrivals be something with which Europe doesn’t want to rock the boat with Ankara?
By Akin Nazli in Belgrade April 26, 2021

Turkish authorities have announced that they are expanding an investigation into allegations of people smuggling levelled against a municipality run by Turkey’s ruling Justice and Development Party (AKP), Al-monitor has reported.

The AKP-held Yesilyurt municipality in Malatya province of Central East Anatolia issued “grey passports” (service passports given to those on official duties) to 47 party members for a study trip last September. The convoy of those given the passports entered Germany without visas, but of the 47 only four have returned, Turkish daily Sozcu reported.

The scandal broke after Gunnur Tabel, a municipal council member in Yesilyurt, submitted a motion concerning the “project”.

Municipalities can request a service passport for anyone on an official trip. It provides visa-free entry to various countries, according to another local daily, Sabah.

It is understood that the Yesilyurt instance was not an isolated case. The service passport approach is a widely used method for smuggling people to Europe, bianet reported on April 20.

The sending of people to Europe via municipalities is thought to have become a "sector", the publication added on April 19.

In Germany, parliamentary inquiries and a lawsuit have been filed, while public prosecutors in different states have launched investigations.

And a free pass on people smuggling too?

“I was hungry, yes? Look, imagine, I eat meat here every day. I was not able to eat meat there [in Turkey],” one man, who got to Germany via the grey passport scheme, told Haberturk on April 19.

After the Yesilyurt case was exposed, a multitude of reports about similar incidents in Tusba (Van province), Erbaa (Tokat) and Ucocak, Akcakiraz and Aricak (Elazig) were published.

Akcakiraz Mayor Sabahattin Kaya on April 16 confirmed an incidence to Sozcu. In exchange for letting people travel on grey passports, the municipality received a truck worth Turkish lira (TRY) 100,000 ($12,380), he admitted.

“They send euros to their families here. If the profit is more than the loss, then I find it right and just,” he also said.

Daily Cumhuriyet has claimed that some people were previously smuggled via the Presidency of Religious Affairs.

The Turkish interior ministry on April 16 announced a temporary suspension of the issuance of service passports to people who are not civil servants, Sabah reported.

The deputy governor of Yesilyurt, the director of the local civic registry in charge of arranging passports and two others were suspended amid investigations.

“Abuse” of the service passport scheme was not uncommon and governorates were repeatedly warned against people taking advantage of the passports, according to the interior ministry.

The ministry added that attempts to smuggle people abroad under the guise of “learning and culture trips” have previously been thwarted. It mentioned a police operation in Ankara last month mounted against people who arrange grey passport trips.

In 2017, an investigation was launched when a folk dance company’s trip to Hungary ended with 11 members of the party applying for asylum in the country.

On April 22, duvaR.English reported that a Turkish man accused of smuggling Turkish nationals to Germany using service passports would be tried in Hannover.

It also quoted German Green Party lawmaker Cemal Bozoglu as saying that 37 people from Urfa in southeastern Turkey tried to migrate to Bavaria. "We don't know if these people ever arrived here or not, but we know that they were members of the AKP," Bozoglu was cited as saying, adding that he has presented a series of parliamentary questions about the incident.