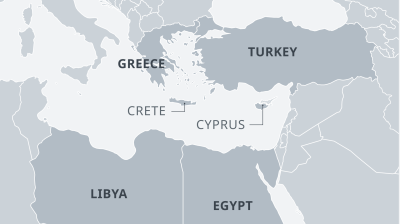 Greece has described an agreement between conflict-torn Libya’s internationally recognised government and Turkey on maritime boundaries in the Mediterranean Sea as absurd because it ignores the presence of the Greek island of Crete between the Libyan and Turkish coasts.

Turkey announced the accord plus an agreement on expanded security and military cooperation on November 28. But Ankara gave no details of the announced memorandum of understanding on the “delimitation of maritime jurisdictions” and failed to specify where it sees Turkish and Libyan waters as meeting.

At odds over drilling

Athens and Ankara are already at odds because of Turkish drilling in the eastern Mediterranean off the coast of the divided island of Cyprus, which Nicosia says infringes its exclusive economic zone. The European Union has prepared sanctions against Ankara in response.

The new agreements were signed at a meeting on November 27 between Turkish President Recep Tayyip Erdogan and Fayez al-Serraj, head of the Tripoli-based government. Turkey backs that government against military forces led by Khalifa Haftar based in eastern Libya.

He added that Ankara was in favour of a “fair sharing” of resources, including off the island of Cyprus, part of which is controlled by breakaway Turkish Cypriots who have no international recognition apart from that maintained by Turkey.

Greek Foreign Minister Nikos Dendias was quoted by Reuters as saying the maritime accord between Libya and Turkey “ignores something that is blatantly obvious, which is that between those two countries there is the large geographical land mass of Crete. Consequently such an attempt borders on the absurd.”

Egypt described the deal as “illegal and not binding or affecting the interests and the rights of any third parties”.

The government in Tripoli confirmed the new agreements but gave no details.

NEWSBASE: A closer look at Niger with Savannah Petroleum