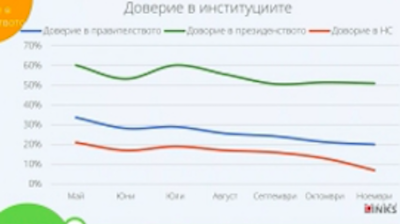 Trust in Bulgarian institutions has slumped, with just 7% of respondents saying they trust the parliament, although the presidency, under President Rumen Radev, has a higher rating.
By bne IntelliNews December 3, 2018

Three quarters of Bulgarians are unhappy with the constant political scandals in the country, according to a survey by Market Links agency released on December 3.

The agency noted that Bulgarians' feelings about the current situation are similar to in 2013 when thousands of Bulgarians protested for months against the government of then prime minister Plamen Oresharski. That government had to resign around a year after taking office.

“It can be predicted that currently the Bulgarian citizens are in a situation to expect an early election, because the discontent and dissatisfaction from the way the country is developing is too high,” Market Links noted.

In May, the share of those unhappy with the current state was significantly lower at just 55%.

Trust in parliament has sunk to just 7% of all polled, negatively affected by the delayed resignation of former deputy prime minister Valeri Simeonov. Both ruling Gerb and its main opposition – the Bulgarian Socialist Party (BSP) – have lost support due to Simeonov’s late move.

Prime Minister Boyko Borissov’s deputy resigned on November 16 after a month of protests demanding his dismissal. Simeonov was pushed to quit the government by mothers of disabled children and their supporters who had been protesting since mid-October after he made a highly offensive statement about them. However, he was replaced by his former head of cabinet Mariana Nikolova.

The presidency was the only institution to enjoy higher approval than in the previous poll – 51% of people said they trust the institution.

Meanwhile, nearly 80% of respondents said they have reasons to protest and are supporting the protests even if they are not taking part in them. Moreover, a new wave of mass protests could be expected.

The main reason for dissatisfaction appeared to be low living standards, along with poor governance, the bad condition of the health sector and the widespread high-level corruption, Market Links noted.

In an election, 27.7% of all voters would back Gerb, while 24.9% would vote for the BSP. The ethnic-Turk Movement for Rights and Freedom (DPS) would gain 5.7%, while newly-established Democratic Bulgaria would be backed by 4.6%, also entering parliament. The United Patriots would also make it to parliament with 5.2% support, Market Links noted.

Croatia to be among countries worst hit by tourism collapse this year, says UNCTAD
22 hours ago
Russians, Serbians, Turks the biggest property buyers in Montenegro
1 day ago
Polish PMI advances but remains below 50 points as restrictions lifted
1 day ago
Czech PMI slightly up in June but still under 50-point threshold
1 day ago
Russian corporate profits recovering, but still down by half on 2019 in April
2 days ago