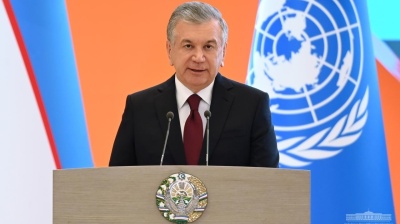 150 countries opted to sign UNESCO's "Tashkent Declaration" that commits it to early childhood care and education. With the fastest growing population in the CIS, education plays a central role in Uzbekistan development plans. / bne IntelliNews
By Cameron Jones in Tashkent November 21, 2022

Tashkent is no stranger to the signing of declarations. It was in this city, then part of the Uzbek Soviet Socialist Republic, that the Soviet Union attempted to mediate an (unsuccessful) peace agreement between India and Pakistan on January 10, 1966. From 14 to November 16, 2022, however, Tashkent was home to the signing of a different declaration: the World Conference on Early Childhood Care and Education. 150 countries opted to sign UNESCO's "Tashkent Declaration" and around 2,500 and 70 sector ministers took part in the event. UNESCO seeks to mobilise the international community’s signatories around the document to fulfil the declaration's commitments.

Speaking at the event, UNESCO Director-General Audrey Azoulay said: "In Uzbekistan we have the opportunity to send a powerful message to the world based on UNESCO's commitment to make 2022 the year of mobilisation of efforts for education. Here in Tashkent we must determine the model of society we want to live in – a society that takes care of its children, guiding them and giving them all the attention they deserve." Azoulay’s comments come amidst a backdrop of a deteriorating educational situation across many countries, especially in preschool education, following the pedagogical chaos that emerged during the coronavirus (COVID-19) pandemic.

The declaration aims to provide a framework around which different ministries tasked with improving childcare can operate. The most important paragraph that signatories are expected to implement is "4.2," which states: "by 30 to ensure that all the little girls and boys have access to quality early childhood development care and preschool education systems so that they will be ready for primary education."

The event was also a chance for Uzbekistan's president, Shavkat Mirziyoyev, to demonstrate the reforms in Uzbekistan's educational sector. The president outlined how the numbers of educators and teachers in Uzbekistan have increased threefold to 160,000, while the qualifications of these 160,000 have been further strengthened under new reforms. The number of children receiving an education in kindergartens has also skyrocketed from 600,000 to 2mn, with the rate of children's coverage now at 70%. The improvements represent an increase of 59% in this area since 2020, which makes Uzbekistan the world leader in improving preschool education coverage.

What is most striking about Uzbekistan's improvements in this area is that they come at a time of disappointing results for many of the world's developed nations, with the United Kingdom and the United States both faltering in this area since the pandemic of 2020. As a result of the 2017 reforms undertaken by Mirzoyoyev, Uzbekistan is now one of the only countries in the world with a specific "Ministry of Preschool Education", with the preschool minister having attended the event.

Uzbekistan is a nation proud of its contribution to science and mathematics. It is a country that has produced the likes of Muhammad ibn Musa al-Khwarizmi, the “father of algebra”, and Samarkand’s Sultan Mirzo Ulugbek, whose work in advancing trigonometry and astronomy failed to make up for his disastrous governance skills. Following the successful organisation of the conference in Tashkent, Mirziyoyev has suggested that UNESCO establish a Category II Institute for "co-ordination of actions in the field of education" in the Uzbek capital.

Education is a crucial area of concern for the government in Uzbekistan, which is looking to tap into the country's ever-growing young population. Central Asia is the only area of the former Soviet Union that has seen its population increase since 1991, with demographic growth and a young population looking to stay stable in the new future. This point was highlighted several times by speakers at ICT Week Uzbekistan 2022, where Uzbekistan showcased the improvements it has made in the IT sphere. 30,000 students graduate annually from IT-related courses at 58 universities dedicated to IT each year, with the number continuing to expand.

Uzbekistan will hope that its investments in future generations will pay off as the double-landlocked nation seeks to capitalise on its demographic advantages and emphasis on a well-educated workforce.

Ukraine's largest online retailer Rozetka has announced the expansion of its delivery points in the Uzbek capital after two months of commissioning. Vladislav Chechetkin, co-founder of the online ... more