Zelenskiy in London to do $1.6bn arms deal, as relations with IMF sour 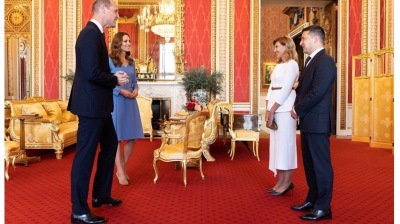 Ukrainian President Volodymyr Zelenskiy met with Prince William and his wife Kate during a trip to London to sign a new trade deal / wiki
By Ben Aris in Berlin October 9, 2020

Ukrainian President Volodymyr Zelenskiy was in London on October 8 to sign off on a 10-year loan of $1.6bn to build 10 new fast attack boats for the Ukrainian Navy to use in the Black Sea.

The deal comes as Europe downplays the Zelenskiy administration's increasingly obvious failure to push through on the reform agenda that makes further distribution of International Monetary Fund (IMF) aid this year increasingly unlikely.

In the first royal event in six months after the signing ceremony, Zelenskiy went with his wife Olena to Buckingham Palace to meet Prince William and his wife Kate, who hosted the Ukrainian couple in the throne room on the Queen’s behalf. Zelenskiy was in London to signed off on a new trade agreement with the UK.

Zelenskiy also met with Prime Minister Boris Johnson, who told the Ukrainian president that Britain’s commitment to his country was rock solid. “Our commitment to Ukraine is rock solid – we’re with you 100%,” Johnson told Zelenskiy.

“It seems that Europe is willing to turn a blind eye to Ukraine’s backtracking on reform as long as it continues to play its role as a bulwark to Russia,” said Tim Ash, senior sovereign strategist at BlueBay Asset Management, in a note.

Armed with eight ship-killer Neptune missiles and carrying a crew of 35, the 56-metre Barzan class boats will have a range of 1,800 nautical miles, the equivalent of the voyage from Odesa to the Kerch Strait and back.

The first two boats are to be built by BAE Systems Maritime, possible at the Portsmouth Naval Dockyard. The other six will be built in Ukraine.

The EU and Ukraine also signed deals for loans and aid totalling €390mn at the October 6 annual EU-Ukraine summit in Brussels. The European Investment Bank (EIB), the EU’s investment bank, is lending €300mn to increase the energy efficiency of 1,000 public buildings in Ukraine – schools, hospitals and cultural centres. Administered by the Communities and Territories Development Ministry, the building improvements will cut heating bills.

While Europe is going soft on Kyiv, Ukraine is coming in for increasing criticism as Zelenskiy’s government is putting more effort into consolidating power in the president’s hands than it is seeing its hectic legislative programme through that was launched as soon as the president’s party, Servant of the People (SOTP), took over last summer.

In particular, the IMF has expressed concern over the mounting attacks on the independence of the National Bank of Ukraine (NBU). The IMF has already given Ukraine $2.1bn shortly after the so-called anti-Kolomoisky banking law that was signed on May 18. At the time the IMF released a statement making it explicit that the NBU’s independence was not to be tampered with.

Within a week of receiving the money the well respected governor of the central bank Yakiv Smolii unexpectedly quit on June 2, citing “systematic political pressure” as the reason for his departure.

The new governor of the NBU, Kyrylo Shevchenko, was appointed in July this year and has been pushing out the remaining members of the NBU board from the old regime.

In the latest scandal Shevchenko publically rebuked the two remaining members of the old team, NBU First Deputy Governor Kateryna Rozhkova and NBU Deputy Governor Dmytro Solohub, for speaking to the press. They said that relations with the IMF have to be rebuilt “from scratch” and suggested that Ukraine will receive no more money from the IMF until this task is completed.

The IMF signalled on October 8 that it is watching the spat between the governor and his deputies closely. “The [previous composition of the board of the central bank] has served the National Bank of Ukraine - and the Ukrainian economy - well by strengthening the confidence in the NBU as an independent and professional central bank,” Goesta Ljungman, resident representative of the Fund, said in a press statement.

In London Zelenskiy tried to reassure investors in Ukraine’s Eurobonds that everything was going well: “The National Bank was, is and will remain independent...We are grateful to the IMF, the EU and the World Bank for financial support packages for our country and support for important reforms in Ukraine.”

A second tranche of $700mn is due about now, but will almost certainly be delayed, say analysts.

“It is hard to see any IMF review or indeed disbursements until this issue is resolved,” said Ash. “It is fair for the IMF and markets to take some time to assess the new team and their actions.”

The IMF has not sent a review team to Kyiv, which is necessary before any new money can be distributed.