Zelenskiy comfortably wins first round of Ukraine's presidential election, according to exit polls 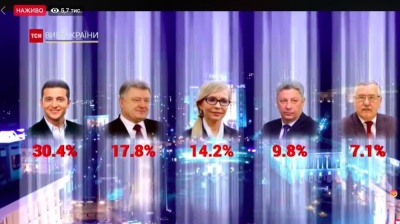 Ukraine's outsider and comic Volodymyr Zelenskiy won 30.1% of the vote in the first round of the presidential election according to exit polls / wiki
By bne IntelliNews March 31, 2019

Exit polls say that outsider and comic Volodymyr Zelenskiy has won the first round of Ukraine’s presidential election and will face off against incumbent President Petro Poroshenko in the April 21 runoff.

A TSN exit poll commissioned by 1+1 TV channel found that Zelensky won 30.1% in Ukraine’s presidential race, leaving behind Poroshenko with 18.5%, while opposition leader Yulia Tymoshenko, the early leader in the polls, came third with 14.0%. The other significant contestants in the field were head of the Opposition Bloc Yuriy Boyko (aka Boiko) with 9.1% and independent candidate Anatoliy Hrytsenko with 7.6%.

Candidates need to win over 50% in the first round for a clear victory, otherwise the first two across the line face off in a second round vote within a month of the election.

The result of the exit poll matches results from other polls although the Central Election Commission (CEC) will work through the night of March 31 to count the final tally and Ukrainian polls are notoriously unreliable.

And it may take several days for a final result to be announced. Tymoshenko’s camp has already suggested it will contest the result if their candidate fails to make it to the second round. Tymoshenko’s campaign headquarters issued a statement in the early evening saying its own exit poll showed her taking second place but did not contest Zelenskiy’s win: Zelenskiy (27%), Tymoshenko (20.9%) and Poroshenko (17.5%), Tymoshenko’s camp said as cited by Ukrainsky Pravda.

"Our exit poll says I'm the second. We are not questioning Zelenskiy's first place but Poroshenko is third according to our poll. In our country without democracy(!) no one can rely on sociology,” Tymoshenko said in comments cited by Ukraine watchers on Twitter.

She went on to claim that the exit poll results had been “bought” without giving details, and asked people to wait for the final count: “until we get last ballot paper we won’t dispute the result, but when we get them and see the difference in numbers we will... We will fight Zelensky in the second round,” Tymoshenko said in comments cited on social media.

Tymoshenko could produce a surprise in the final tally as she has built up an effective network of party offices across the country and her populist message plays well in rural areas.

If the results are confirmed then Poroshenko has pulled off a remarkable turnaround in his fortunes. A month ago not a single poll had Poroshenko in second place and he went into the polls leading the “won’t vote for under any circumstances” rankings. Poroshenko told journalists after the exit polls were announced at 8pm local time that his second place was a “harsh lesson”.

The campaign has become increasingly dirty in the last few weeks with both sides slinging mud at each other, accusing each other of vote buying and making use of “administrative resources”. All-in-all this mud wrestling has probably played to Zelenskiy’s advantage as he has managed to stay above the fray and spent part of election night playing ping pong with journalists in his election headquarters.

Turnout appears to be high and was running a few percentage points above the previous elections according to the preliminary results. However, in some regions, especially in western Ukraine, the turnover was unusually low, but observers explained the low numbers as so many young people in the western regions are currently abroad working in one of the neighbouring EU countries. Concurrently there were long lines of Ukrainians waiting to vote in embassies in Europe, especially in Warsaw, Prague and Berlin.

“Rock-bottom turnout for Zarkapatye in far western Ukraine (29.35%) is evidence of the exodus of young Ukrainians abroad for work. Elections official tells us that the reason many did not vote there is because they are not physically there anymore,” tweeted Andrew Roth, a Guardian correspondent who was in Ukraine for the elections.

“The region with the second lowest turnout at 3pm (Ivano-Frankivsk, also in western Ukraine) is at 38.5%, which is almost 10% higher. Western Ukraine as a whole registers lower turnout, but Zarkapatye is shaping up to be an impressive outlier,” reported bne IntelliNews contributor Fabrice Deprez, who is also in Kyiv for the event.

Despite the hype the CEC reported no problems with hacking or cyber attacks, but also warned that if attacks were to come they would come in the evening during the vote counting process.

Now the first round is over the gloves immediately came off as the candidates focus on winning the second round. While Zelenskiy could count on a strong protest vote tailwind in the first round, the second will be more difficult to win as Poroshenko is likely to emphasise his lack of experience and was already playing the Putin card.

Zelenskiy was asked by another journalist what he would say if meets Putin, to which he responded: “finally you have given our territories back to us, how much are you going to compensate us with money for taking our territories away?”

Poroshenko called for a “total mobilisation of patriots” in the second round and clearly intends to sell himself as a war leader that has shown himself to be tough on Russia and willing to face down the Kremlin.

For his part Zelenskiy has been selling himself as more focused on domestic issues and improving the quality of life.

"Today a new life starts, without corruption," Zelenskiy told his jubilant supporters following the release of the first exit poll numbers, in a dig at Poroshenko, who has failed to deliver on the promises of a better life implicit in the Euromaidan uprising.

Poroshenko also indicated that he will attack Zelenskiy for his connections to Ukraine’s most powerful oligarch Ihor Kolomoisky, whose TV stations backed the comic and have been accused to funneling money to the actor. Poroshenko appealed to "candidates who did not make it into the second round, to fight against Moscow and the puppet of Kolomoisky."

Zelenskiy appears to already putting a team together to counter the charges of inexperience and reportedly has been wooing liberal reformers, former finance minister Oleksandr Danylyuk and former economics minister Aivaras Abromavicius, who would be well received by the west if they were to re-join the government.

Abromavicius is already an advisor to Zelenskiy and told RFE/RL at the candidate's headquarters on election night that after hearing Poroshenko's remarks he thought the second round would be "very dirty."

Danylyuk was sacked after he took a stand to fight against corruption and tackle the interests of some of Ukraine’s top oligarchs. Abromavicius quit as economics minister and caused a political crisis by calling out the endemic corruption in government. Both are seen by Ukraine’s donors as highly competent ministers.

The jury remains out on how the Kremlin will see the results. Russia would clearly be happy to see Poroshenko go as he has been intractably opposed to Putin and lobbied tirelessly in the west for more sanctions and a hard line against Russia. But it is not clear if a Zelenskiy victory will improve Russia’s position or weaken sanctions, say Russian analysts interviewed by Vedomosti.

“It is difficult to say which of the candidates will be better for Russia. I remember how jubilant it was in the Russian elite when Donald Trump [won the 2016 US presidential election]: “Now we will come to an agreement with America! There will be no problems! Trump is ours! ”And then it turned out that Trump is not very good and maybe even not at all good,” Alexey Makarkin, deputy director of the Centre for Political Technologies, told the Russian daily.

Alexander Gushchin, associate professor of the Department of Post-Soviet Foreign Countries, said that relations with Ukraine could hardly get worse if Poroshenko were re-elected and the best hope for possible improvement would be under a Zelenskiy presidency, however, “the general vector of development of Ukraine in the direction of the West is unlikely to change regardless of who wins. Although the victory of Zelenskiy can minimize the risk of power provocations, which we have already seen under Poroshenko."