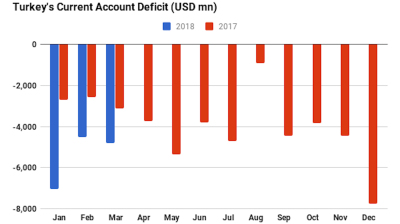 The market had expected a deficit of $4.125bn in the month, according to a Reuters poll of economists.

“The deterioration in Turkey’s current account position since mid-2017 has been driven by a surge in gold imports, a rising energy import bill and strong domestic demand feeding through into imports of other goods”, Jason Tuvey of Capital Economics said in an e-mailed note.

“But with capital inflows now slowing, the current account deficit will have to narrow via weaker domestic demand. Economic growth looks set to slow sharply,” he said.

Turkey’s foreign trade shortfall increased by 33% y/y to $6.65bn in April, preliminary data from the customs ministry showed on May 2.

“ There is a risk of a hard landing for Turkey’s overheating, credit-fueled economy,”  S&P said on May 1 when it cut Turkey’s credit rating further into junk. “ This is reflected in the rising imbalances in Turkey’s economy, most notably in its widening debt-financed current account deficit and high inflation.”

Moody's Investors Service said in a credit outlook report released on April 16 that Turkey’s current account deficit for February came in 60% larger than a year ago, “the result of an economy growing significantly above potential going into a second [consecutive] year”.

According to the latest central bank survey of expectations, Turkey’s end-2018 current account deficit expectations increased to $50.8bn in April from $48.2bn in March.