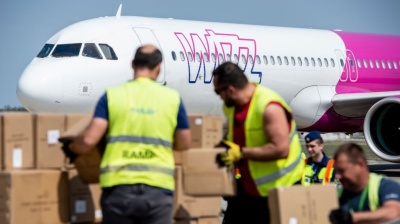 Wizz Air has regularly transported medical equipment from China to Hungary in the last five weeks
By Tamas Szilagyi in Budapest May 3, 2020

Hungarian discount airline Wizz Air restarted its operations from Budapest Liszt Ferenc International Airport with a flight to Berlin on May 1, Budapest Airport operator BA said. Wizz Air and KLM announced last week that they will resume some flights they had previously suspended due to the coronavirus (COVID-19) outbreak from early May.

The no-frills airline said it will require all passengers as well as crew to wear masks on Budapest flights, but it has not taken any decision yet on keeping middle seats empty. IATA director general Alexandre de Juniac had raised the possibility that airlines may have to block middle seats to ensure appropriate social distancing.

The airline asked passengers to check before departure whether they can enter the destination country and whether their movement there could be restricted.

Wizz Air said in mid-April that it was operating at 3% of its pre-pandemic capacity. In recent weeks, the airline was operating cargo flights bringing tonnes of protective gear from China.

Passenger numbers at Liszt Ferenc International Airport have fallen by around 99.3% because of the coronavirus outbreak, which practically led to a halt in air travel.

The average daily number of takeoffs and landings has fallen from 320 to 35 aircraft with most being freight flights. Average daily passenger numbers in April have reached 275 so far, down from a 44,000 daily average a year earlier.

Budapest Airport has become the fastest growing airport in Europe. Traffic has increased by 64% over the last five years and last year's growth of 8.8% was double that of EU airports. Last year Budapest Airport reported 16.2mn passengers. The airport handled more than 1mn passengers in nearly every month of the year, with traffic peaking at 1.5mn in July, August, and September. London remained the most popular destination, as one out of nine passengers chose the British capital.

Analysts forecast a slow recovery for the sector and say it may take years for Budapest Airport to reach pre-crisis levels.

Budapest Airport used the lockdown to complete some renovation works and brought others forward to take advantage of the traffic-free period.