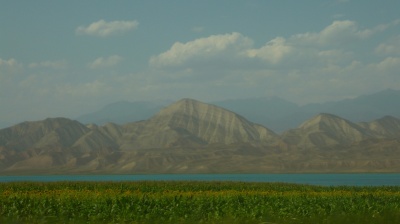 Kyrgyzstan's Toktogul reservoir is the largest of the reservoirs on the Naryn river. / Clare Nuttall
By Aida Kadyrzhanova in Almaty July 6, 2022

Global warming is melting the glaciers in the Tien Shan mountains in Kyrgyzstan, part of the chain of mountains that run on to Tibet, and causing avalanches.

Researchers say climate change is causing rapid melting of glaciers in the ‘Third Pole’, disrupting water distribution in Tajikistan and Kyrgyzstan and making it difficult for these and other developing countries to provide water to their populations.

Nicknamed ‘The Third Pole’, the Tibetan Plateau is home to the largest global store of frozen water outside of the north and south polar regions. The region functions as a complex water distribution system which delivers the life-giving liquid to multiple countries, including parts of Afghanistan, China, India, Kyrgyzstan, Nepal, Pakistan and Tajikistan.

In Central Asia, water is vital for agriculture, as well as for hydropower stations that generate electricity for domestic consumption and export.

Now, however, climate change is causing an imbalance, with areas in the north getting more rain than in the south. This is exacerbating the problem of water loss downstream.

Because many vulnerable societies border these downstream basins, this worsening disparity could heighten conflicts or exacerbate already tense situations between countries that share these river basins. In 2021, the deadliest border conflict between Kyrgyzstan and Tajikistan in years started as a water dispute between local residents.

“Populations are growing so rapidly, and so is the water demand,” said Lonnie Thompson, senior research scientist at the Byrd Polar Research Center, as quoted by Science Daily. "These problems can lead to heightened risks of international and even domestic disputes.

“The way that regional climate varies, there are winners and losers,” Thompson added. “But we have to learn to work together in order to ensure adequate and equitable water supplies throughout this region. As local temperatures continue to rise and water resources become depleted, more people will end up facing ever diminishing water supplies.”

If policymakers do decide to listen to the scientists' counsel, these new policies could be used to develop adaptation measures for the region through collaboration between upstream and downstream countries.

“For the most part, I don’t think people in Tajikistan understand how climate change is going to impact electricity production. Part of it has to do not only with the lack of knowledge but also with a lack of transparency on the part of the government. The government never acknowledges the larger systemic issues behind electricity shortages, which prevents people from understanding how it’s all connected to melting glaciers and climate change,” Sher Khashimov, a Tajik journalist, told RFE/RL.

“After all, when things go awry in one area of the world, like the butterfly effect, they tend to have long-lasting effects on the rest of Earth’s population,” Thompson noted. “It doesn't matter what country or what part of the world you come from. Sooner or later, you’ll have a similar problem.”

Over the past five years, Central Asian countries have already seen some of the region’s worst droughts, which has led to shortages of water for irrigation and hydropower.

Temperatures in Central Asia are rising faster than the global average according to the 2019 report by the Intergovernmental Panel on Climate Change. Scientists predict that the region will become drier, and more parts of it will turn into deserts.

“Irrigation in the region is very vulnerable to climate change, and investments in both institutional strengthening and infrastructure modernisation are required to build resilience,” said William Young, World Bank expert in Central Asia, earlier in 2022.

A World Bank report published last September estimated that Central Asia could see as many as 5mn internal climate migrants by 2050.

More pain stored up for Emerging Europe in 2023
Kyrgyzstan, Uzbekistan warn citizens not to sign up to fight for Russia in Ukraine
CENTRAL ASIA BLOG: Media risk underplaying significance of Tajikistan’s attack on Kyrgyzstan says academic

bneGREEN: Fit for 55 – not fit for purpose
6 hours ago
bneGREEN: Slovenia’s Sigma Energy deploys device to convert sea waves into electricity
12 days ago
bneGreen: Southeast Europe’s first eco-mosque opens in Croatia
19 days ago
bneGREEN: Europe pays what it takes to bring in LNG but still cannot get enough
21 days ago
bneGREEN: Baltic states – except Russia – agree to aim for seven-fold increase in offshore wind
29 days ago