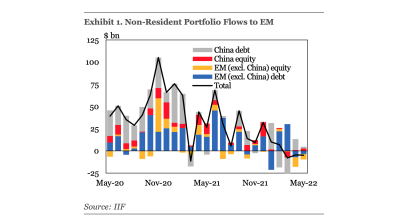 A perfect storm of food price inflation and a war in Ukraine has seen investors pull $5bn out of Emerging Markets in May, the third month of outflows in a row. / wiki
By Ben Aris in Berlin June 9, 2022

Emerging Market securities suffered an outflow of $4.9bn in May 2022, according to estimates by the Institute of International Finance (IIF), continuing the episode started two months ago after Russia’s invasion of Ukraine shook the world.

The war in Ukraine, a major supplier of grain, has exaggerated food price inflation globally that was already a problem following the disruption to supply chains caused by the coronavirus (COVID-19) pandemic. Central banks around the world have scrambled to hike rates to contain the inflation, but the war has made the situation worse. The resurgence of the coronavirus in China in May has only unsettled investors further.

The rate hikes are causing global growth to slow. The World Bank revised its global growth forecast down again on June 8 to 2.9% in 2022 from 4.1% at the start of this year, and warned that the chances of a global recession have increased.

"The world economy is again in danger," World Bank President David Malpass wrote in the report. "It is facing high inflation and slow growth at the same time. Even if a global recession is averted, the pain of stagflation could persist for several years – unless major supply increases are set in motion."

After enjoying a boom in 2021, equity markets, and especially Emerging Market equities, have taken a bath this year. The Russian market saw a dozen IPOs last year, but it has been effectively put off limits since extreme sanctions were imposed earlier this year. At the same time, strict currency controls imposed by the Central Bank of Russia (CBR) have made it impossible for investors to get their money out.

The problems on the Russian market have spilled over to several other markets. Investors are asking in particular what will happen to the Chinese markets, as Beijing has offered lukewarm support to Russia, trying to sail the line between supporting Moscow in its showdown with the West but at the same time avoiding bring down sanctions on itself.

“With a similar dynamic [to] last month, our high frequency data registered outflows from EM x/China equities ($6.1bn), which mostly explain the outflows during May. Our tracker also showed a considerable portion of flows escaping China equities for most of the month. However, the last week of May saw important inflows, which changed the tendency and pushed China equity flows into positive territory by the end of the month ($2.7bn). The perspective for debt flows seems to be stabilising, with China registering $2bn of inflows, while EM x/China debt showed $3.5bn of outflows,” Fortun said.

“In the aftermath of Russia’s invasion of Ukraine, we flagged non-resident outflows from China, which were noteworthy because China very rarely registers meaningful outflows,” Fortun added.

Fortun says it is still too early to tell if there is a permanent change in the view of China, due to its association with Russia, but the question has been raised and that has cooled investors ardour for the market. All these factors combined have led to a sharp fall in inflows to all Emerging Markets, reports IIF.

“Moving forward, we see a continuation of the current context of volatility on flow dynamics, as growing global recession risk weighs on the EM complex and at the same time country specific factors come into play,” Fortun said. “Regionally, our data shows marginal gains in EM Europe and Africa & Middle East (inflows of $3.5bn and $2.7bn respectively), with other regions showing outflows.”

The World Bank expects more of the same next year, with growth anticipated to remain sluggish in 2023, below the average recorded in the previous decade. Few countries are immune to the inflation shock: in the US, growth is forecast to slow to 2.5% this year. China's growth is also predicted to slow to 4.3%, down from 8.1% in 2021. Russia’s economy will contract by 15%, according to the IIF, and Ukraine will see its economy shrink by between 30% and 45% according to varying estimates. 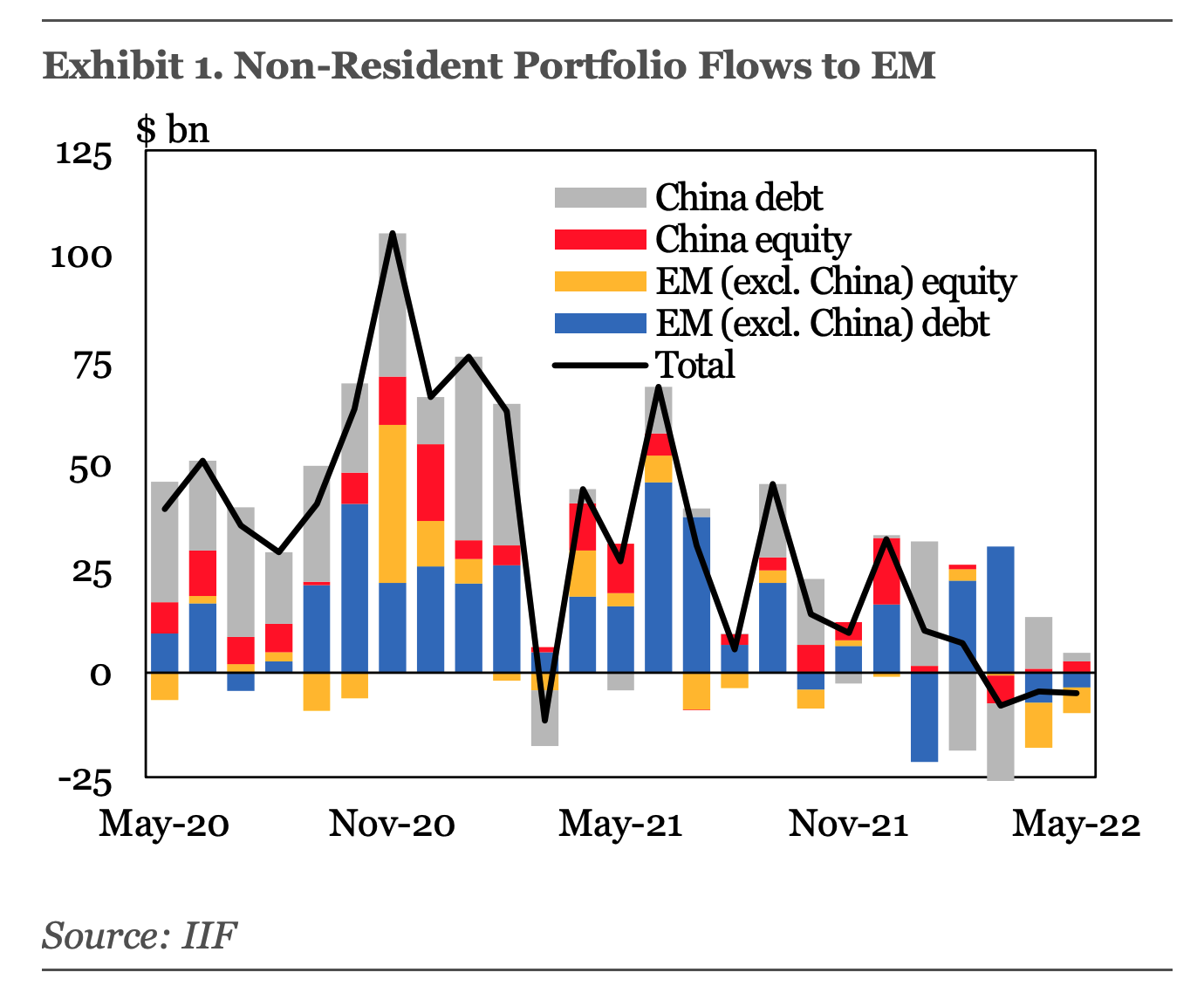 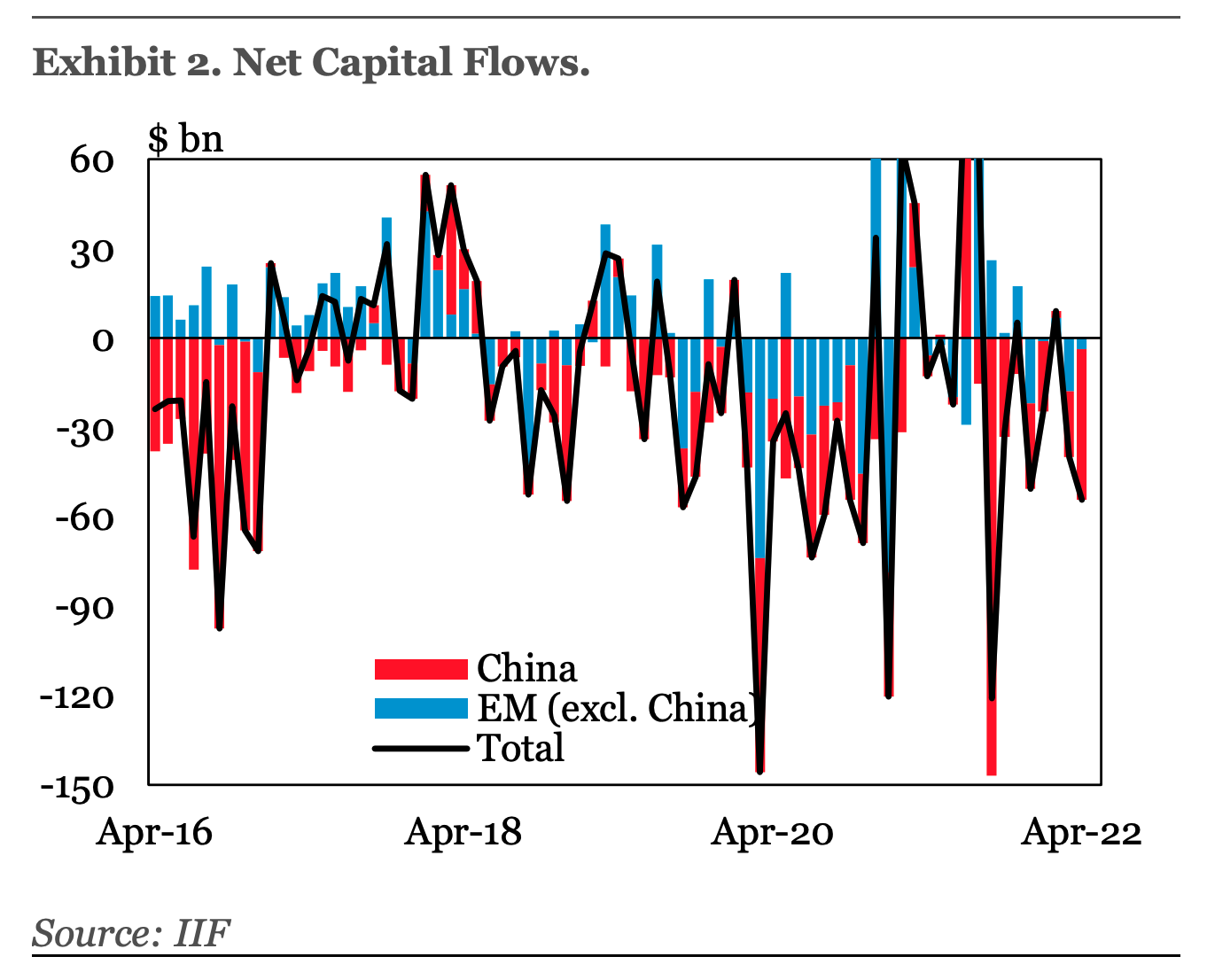