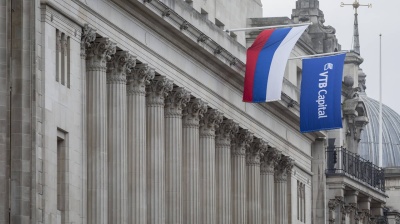 VTB has axed its London staff and moved many to Frankfurt after losses at the UK unit trebled / wiki
By Jason Corcoran in Moscow May 7, 2019

The UK business of Russia's second-biggest bank saw its post-tax loss balloon to $63.9mn last year from $20.4mn for 2017, according to a filing made to UK Companies House late in April. The comprehensive 155-page filing shows that the bank slashed its London headcount by 55 bankers to 206 from 261 and outlined plans for further cuts, as well a new “strategic focus” to build “in parallel” a trading book capability at VTB’s operation in Frankfurt.

The Kremlin lender, which is run by former Soviet diplomat Andrey Kostin, has been struggling in London ever since the parent group was sanctioned by the US and the EU over Russia’s involvement in the Ukraine conflict and the unit has suffered from severe contagion as well as a collapse in commodity prices. The bank's position has been further undermined after the UK last year expelled 23 Russian diplomats, who the government said were “undeclared intelligence officers,” after accusing Moscow of using a nerve agent in the attempted murder of former Russian spy Sergei Skripal in Salisbury.

“In 2018, the bank undertook a strategic review of its business model with a view to reducing both the liquidity and capital requirements of the bank going forward given the deterioration in the geopolitical landscape between the UK and Russia and the growing uncertainty around the UK’s withdrawal process from the European Union,” said VTB secretary Roger Munger in the filing.

“Following this review, the parent bank concluded that it would restructure and reduce its business model within VTBC (London) and, in parallel, build out a trading book capability within its European subsidiary VTB Europe based in Frankfurt.”

As a result of the overhaul, VTB’s London business has offloaded much of its loan portfolio to the bank’s Moscow and Frankfurt arms and reduced its market risk across its fixed income and equity business lines. The bank said it closed its fixed income cash bonds business in Hong Kong and dumped its loss-making Wall Street operation in a management buyout. Fillings show that VTB lost $1mn after vacating the lease early for its Wall Street base.

VTB’s London operation has been a prestigious calling card for the Kremlin in London. In 2008, the bank opened swanky new offices at 14 Cornhill – the former home of Lloyds Bank which is located next to the Bank of England – and started hiring hundreds of bankers until headcount exceeded over 600 personnel.

But western sanctions have turned VTB and its staff into a pariah in the UK capital with the bank forced to sub-lease much of its flash city lodgings. The filings say VTB has a 20-year lease until February 2028 for five floors at 14 Cornhill and that can only be broken in August 2024. In the meantime, the bank "has entered into a sub-lease agreement of office space for the three floors it does not occupy in its main office."

Kostin, who himself was sanctioned last year, has accused the UK regulators of making excessive demands of the UK operation due to Russia’s conflict with Ukraine. A former diplomat, Kostin also caused a stink in September after described former British foreign minister Boris Johnson as a “jerk” at a press conference in Moscow.

Leading Western investors have reined in all trading activities with VTB and other sanctioned Russian brokerages for fear of drawing regulatory scrutiny and fines. In late 2015, New York-based Evercore Partners ended its deal-making joint venture with VTB due to US sanctions. As business has dried up in the US and the UK, both VTB Capital and its parent have made an aggressive push to secure more business in Africa and Asia with mixed results.

In September last year, VTB agreed to a management buyout of its US unit, citing the “current geopolitical landscape” as a reason for its retreat.

A source close to VTB told bne IntelliNews that the Russian bank has already relocated some key staff to Frankfurt. “It’s literally death by a thousand cuts in London,” said the source. “Most people are headed for the scrap heap but some will find homes in Frankfurt.”

VTB has had the largest international presence of all of the Russian banks. With the blessing of President Putin, its investment banking unit VTB Capital began its international expansion a decade ago, opening operations in London, New York, Dubai, Hong Kong, Singapore and Sofia. In 2012 the lender declared its ambitions to build an investment banking empire rival those of Deutsche Bank and UBS. By 2013, 40% of VTB Capital’s profits came from its international business but sanctions have put a dampener on the outlook for future profits.

The bank said it retains operations in Hong Kong, Singapore, Sofia as well as Frankfurt but hasn't said whether Dubai has been shuttered.

“VTB maintains its active position in international capital markets thanks to its professional and experienced team, flexible business model and its readiness to take the initiative when making decisions, depending on the circumstances on the global market,” chairman Philip Mayer, who replaced Herbert Moos last year, said in the filing.