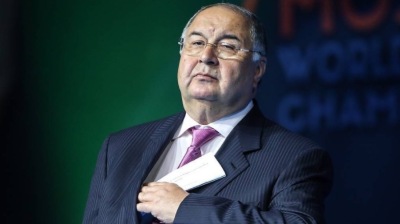 Some of Usmanov’s companies receives exemptions from US oligarch sanctions / wiki
By Ben Aris in Berlin March 4, 2022

The US Treasury Department’s (USTD) latest list of newest sanctions against Russia’s elite contains some exceptions for the companies of Russian metals tycoon Alisher Usmanov, the government agency announced on March 3.

The USTD order exempts companies where Usmanov owns 50% or more that are not listed on the SDN (Specially Designated Nationals) list and says those companies will not be subject to sanctions. Their accounts are available and transactions are allowed, the USTD said.

As of now, none of Usmanov’s companies are listed on the SDN. Moreover, his share in USM’s key assets, such as Metalloinvest or Megafon, are below the 50% threshold, and so not sanctioned.

The USTD followed the EU by releasing a new list of oligarchs, which will be sanctioned on March 3 and is very similar to a list of businesspeople put under sanction by the EU last week.

Leading Russian metallurgical company Metalloinvest, one of the biggest companies in the USM group, issued a statement after Usmanov was added to the EU sanctions list on March 1 saying that the company would not be affected by the sanctions as Usmanov held less than 50% of its shares.

“The restrictive measures imposed by the EU against Alisher Usmanov are of a personal character and will not affect Metalloinvest. Mr. Usmanov owns less than 50% of USM Group’s parent company and does not control the Group's enterprises. Thus the inclusion of Alisher Usmanov in the EU sanctions lists does not extend the effect of the relevant sanctions to USM’s companies”, the statement concluded.

As featured by bne IntelliNews, Usmanov has been one of Russia’s most successful businessmen, making his first million dollars in the dying days of the Soviet Union producing plastic shopping bags. After that he built his fortune in finance, metallurgy and from doing an iconic deal to buy approximately 10% of Facebook’s shares in the midst of the 2008 crisis that eventually returned him several billion dollars.

Usmanov did not participate in the 1995-6 “loans for shares” schemes to privatise state property in the 90s that was the source of the wealth of the first generation of oligarchs during Boris Yeltsin’s presidential tenure. Usmanov largely built his empire from well timed investments, especially in the metallurgical and tech sectors. In the recent years, he emerged as a “green metallurgy” ambassador, having transformed his mining companies Metalloinvest and Udokan Copper, adopting ESG principles and contributing to decarbonising the global economy.

As bne IntelliNews reported, Usmanov, a devout Muslim, has been stepping back from business as he is in over 63 years old, the age at which the Prophet died, and says he now spends most of his time on philanthropy and his main passion, fencing.

A few other oligarchs, and their companies, have been exempted because of their importance to the global commodities market, most notably Oleg Deripaska and his aluminium producer Rusal.

When very harsh sanctions were imposed on Deripaska in 2018 that effectively banned doing any business with the company, prices for aluminium on the London Metals Exchange (LME) soared by 40% overnight potentially causing a price shock for the consumers of the metal. The implementation of those sanctions were at first delayed and eventually withdrawn completely – the only sanctions to be dropped since the sanctions regime was first imposed in 2014 following Russia’s annexation of Crimea in 2014.

Chelsea football club owner Roman Abramovich is also notably missing from the lists of sanctions. Abramovich announced this week that he was selling his shares in Chelsea as it was “best for the club.”

“I have always taken decisions with the Club’s best interest at heart. In the current situation, I have therefore taken the decision to sell the Club, as I believe this is in the best interest of the Club, the fans, the employees, as well as the Club’s sponsors and partners,” Abramovich said in a statement on the club’s website.