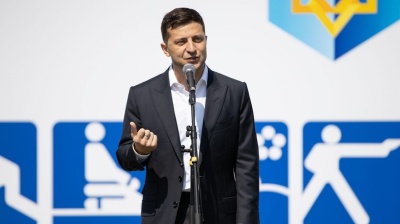 The yield on Ukraine’s government bond due 2027 dropped 12 bp to 7.03% on July 23, approaching the lowest level seen since the 2015 debt restructuring, and following the landslide victory in the parliamentary elections of the party of President Volodymyr Zelenskiy.

The value recovery instrument (VRI), or so-called GDP warrants, guaranteeing additional payments if Ukraine's GDP rebounds strongly in the future under a restructuring deal with the country's private creditors, jumped 1.7 cents, taking the rally over nine days to 6.74 cents, Bloomberg reported on July 23.

The warrants were also helped by the National Bank of Ukraine (NBU) increasing the GDP growth forecast, the news agency added.

The additional VRI payments will be triggered if GDP grows at more than 3% per year, and if nominal GDP exceeds $125bn (compared to approximately $85bn in 2015).

Payments under these conditions will not start before January 2021 and will end in 2040. They will be made two years after the relevant thresholds have been crossed; for example, payments triggered by GDP data for 2019 will be made in 2021. Payments will be limited to a total of 1% of GDP in the reference year until 2015, when this ceiling will be lifted.

On July 19, the NBU revised its economic growth forecast for 2019 to 3% year-on-year compared with its April macroeconomic forecast of 2.5% y/y.

The NBU also revised its 2020 economic growth forecast to 3.2% y/y from 2.9%. The revisions were attributed to "stronger domestic demand, more favorable terms of trade and expectations of a larger harvest of grain crops".

Domestic demand will remain the main driver of economic growth over the coming years. Private consumption growth will decelerate, albeit remaining high owing to an increase in real household income - wages, pensions and remittances from abroad. Capital investment will continue to expand rapidly, which will also provide significant support to the economy, the NBU added.

Economic growth will be dampened by weak global economic activity and a decrease in gas transits to "European countries starting in 2020, due to the construction of bypassing gas pipelines," the statement reads.

The same month, Prime Minister Volodymyr Groysman said that the Ukrainian government forecast  economic growth of over 3% y/y in 2019.

The International Monetary Fund (IMF) has kept its forecasts for Ukraine's GDP growth in 2019 and 2020 unchanged at 2.7% y/y and 3% y/y respectively.

The European Bank for Reconstruction and Development (EBRD) has revised downward its forecast for the growth of Ukraine's real GDP in 2019 to 2.8% y/y from 3% y/y. The multinational lender's also forecasts that the nation's economy will expand by 3% y/y in 2020.

The EBRD believes that large payments on public debt scheduled for 2019-2020 pose a serious risk to the economic development of Ukraine. Therefore maintaining co-operation with creditors remains vital for the recovery of the country's economy.