Ukraine’s Zelenskiy calls on Nato to accelerate its accession 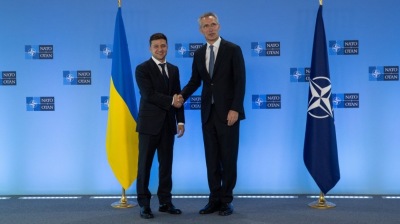 Ukrainian President Volodymyr Zelenskiy urged Nato to speed up his country's membership of the alliance application on April 6, saying it was the only way to end fighting with pro-Russia separatists.

Zelenskiy met with Nato secretary general Jens Stoltenberg on the same day and is calling for Ukraine to be allowed into the military club, as “Nato is the only way to stop the war in Donbas,” Zelenskiy tweeted from his official account. “Ukraine’s MAP will be a real signal for Russia,” the president added, referring to the membership action plan, the first steps in the accession process. 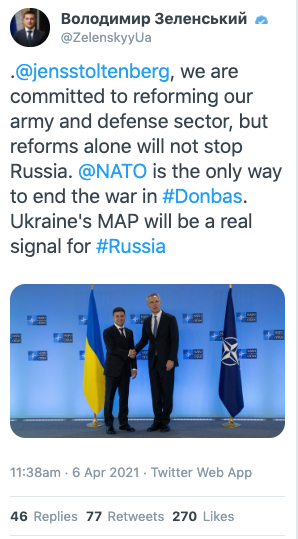 It is not clear if Zelenskiy is also pulling out of the Minsk II agreements, which were designed to end the conflict. German Chancellor Angela Merkel among others has said there is no military solution to the fighting in eastern Ukraine and that the Minsk agreements are the only diplomatic solution on offer.

Tensions have risen rapidly after Russia ostentatiously began unscheduled troop movements close to the Ukraine border and has also been sending more troops to Crimea, where it has a large military base.

However, observers specialising in Ukraine and Russia say that a military clash is unlikely for several reasons. First is the very public nature of the troop movements, which are designed to be seen rather than being a covert build-up ahead of a surprise attack. Second is that the number of troops on the move would actually be insufficient to invade and then hold Ukraine’s territory. And third, the build-up of troops in Crimea does not suggest an attack, as they would have to pass through a bottleneck at the top of the peninsula and so attacking from Crimea makes little tactical sense.

“With Moscow massing its troops on Ukraine’s eastern border and in Crimea, Kyiv has little chance of standing its ground if the standoff deteriorates into a military confrontation. Yet there are reasons to believe that neither side intends to unleash a war. From Ukraine’s standpoint, an offensive in Donbas would likely give Russia a pretext to intervene in the region: Russian officials have repeatedly stated the country’s readiness to protect the self-proclaimed republics. The ensuing losses would ruin Zelenskiy’s already limited public support, while prompt assistance for Ukraine from the West is by no means guaranteed,” Maxim Samorukov, the deputy editor of Carnegie.ru, said in a recent note.

“For Russia, the benefits of going to war with Ukraine are also dubious. Defying the Kremlin’s expectations, the Ukrainian state did not collapse when faced with a far more dire situation in 2014. It is even less likely to do so now. In addition, public opinion polls show clearly that Russian society has grown tired of foreign policy adventurism and will not welcome a new military foray into Ukraine on the eve of the parliamentary elections scheduled for September,” Samorukov added.

At the same time local reports say that Ukraine has also been building up troops in the area over the last two months, which some have suggested provoked the Russian troop movements. However, there is little clarity as to the actual deployments or their purpose at the moment.

There is a consensus amongst the sober analysts following the region that the build-up by Russia is designed to be a warning to Washington not to interfere.

“The purpose of the current military build-up, therefore, is limited to demonstrating to Kyiv and Washington that Russia is prepared to respond with force to any military attempts to change the status quo in Donbas. The ostentation with which the troops are being moved confirms that Russia is sabre-rattling rather than contemplating a blitzkrieg,” says Samorukov.

What is clear is that the ceasefire along the line of contact in Donbas has crumbled, with attacks on the rise and several fatalities reported in the last few days. At least 23 Ukrainian soldiers have been killed since the start of the year, compared with 50 in all of 2020.

Stoltenberg said on April 6 he had called Zelenskiy "to express serious concern about Russia's military activities in and around Ukraine and ongoing ceasefire violations.”

Last week the new US Secretary of State, Antony Blinken, called his counterpart in Kyiv to express US solidarity with Ukraine. The US State Department also called their counterparts in the Russian foreign ministry to express their alarm at the new movements. The Pentagon last week said US forces in Europe had raised their alert status.

The Kremlin has not denied the troop movements but Russian presidential spokesman Dmitry Peskov insisted they were "not threatening anyone” and pointed out that Russia was entitled move troops around on its own territory as part of its own security.

Peskov responded to Zelenskiy's comments on April 6, saying that Nato membership for Ukraine would not help resolve the conflict in Ukraine.

"We very much doubt that this will help Ukraine settle its domestic problem," Peskov said. "From our point of view, it will only worsen the situation.”

"If you ask the opinion of several million people living in the self-declared republics (in the east) you will see that for them NATO membership is deeply unacceptable," he said.