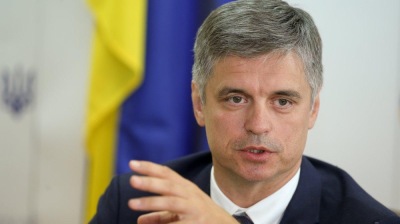 The last chance to fulfil the Minsk II accords is in November according to Ukrainian Foreign Minister Vadym Prystaiko.
By bne IntelliNews October 16, 2019

The last chance to fulfil the Minsk II accords will arrive in November according to Ukrainian Foreign Minister Vadym Prystaiko, as cited by Reuters on October 14.

The last obstacle to holding Ukrainian President Volodymyr Zelenskiy's first Normandy Four meeting (Ukraine, Russia, France and Germany) was for Zelenskiy to sign off on the so-called Steinmeier Formula at the insistence of the Kremlin.

That hurdle was cleared two weeks ago but so far the various sides have been unable to find a date to meet. Any delay puts increasing pressure on Zelenskiy who is in a rush to make as much progress as he can before his honeymoon with the Ukrainian public is over. And a poll by Kyiv International Institute of Sociology (KIIS) out this week shows that his popularity is already slipping.

Before a Normandy meeting can be held there also has to be a seven-day ceasefire, but there are problems there too. The Ukrainian government tried to order troops back from the front line last week, but veterans and far-right supporters of paramilitary groups have threatened to take up the place of withdrawing solders to continue the fight.

Far right groups like Azov and C14 do not want to see any compromise by Ukraine in its struggle with Russia in the Donbas region. They are backed by former President Petro Poroshenko who was prominent at a recent 10,000 people-strong “no capitulation” demonstration on Maidan square last weekend.

“We are striving for the middle of the next month,” Prystaiko said. “We have openly told everyone that we are attempting, possibly, the last honest attempt to go down the Minsk path.”

After a meeting of the European Parliament Foreign Affairs Committee, Prystaiko told reporters that the other option to fulfilling the Minsk Accords is introducing an international peacekeeping mission in Donbas. “So far only a discussion of these issues has occurred, but no one has even come close to a decision,” he said, as reported by the Ukrinform news agency. “Even the mission –, which was supposed to have arrived in Ukraine to assess how possible this is at all – was not sent by the UN,” he said.

Zelenskiy has tried to impose a ceasefire, but the resistance from Ukrainian nationalist paramilitaries was highlighted by Russian President Vladimir Putin as a obstacle to holding the meeting, Putin said on October 11, as reported by the TASS news agency.

“Nationalist military formations arrived there and publicly stated, ‘If the army leaves these positions, we will take them. The army isn’t leaving’,” Putin said, adding that the Ukrainian government must show political will to begin the withdrawals at the towns of Zolote and Petrivske before the Normandy meeting is possible.

“The idea for a peacekeeping mission has been kicked about since the war in Donbas began. The reason that a mission was never dispatched to Ukraine is that there is no chance that the UN or the OSCE will want to get its peacekeepers involved in Donbas without a serious peace plan in place,” Zenon Zawada of Concorde Capital said in a note.

“The November deadline set by Prystaiko for fulfilling the Minsk Accords is intended to pressure Russian President Putin to get serious about his claims to want to end the warfare. Putin’s goal is to sow enough internal fighting in Ukraine to spread the warfare, or induce a collapse of statehood. Fulfilling the Minsk Accords would accomplish that, but undermining Zelenskiy’s support among the public would be even more effective and easier, without involving the international community,” Zawada added. “So we expect Putin will ignore this November deadline as he moves towards the goal of discrediting the Zelenskiy administration and creating a wider chasm between those supporting capitulation, and those against. We only see Putin fulfilling the Minsk Accords with enough pressure from Western powers.”