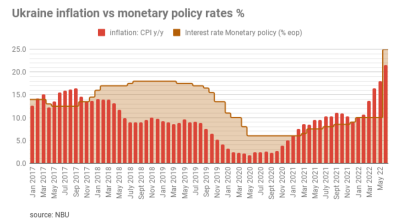 The National Bank of Ukraine (NBU) put through an emergency rate hike in June to subdue soaring inflation, but to little effect. The rate of price growth continued to hit 21.5% in June (chart), the central bank reported on June 14.

The NBU suspended rate policy meetings after the war with Russia began at the end of February, but took radical action at its first meeting afterwards, more than doubling the prime interest rates to 25% on June 2.

Inflationary pressures are extreme in Ukraine as the government struggles to fund the war. Ukraine is running out of money and the budget is under strain. Tax receipts have collapsed by some 80% and Ukraine’s exports have been reduced to a quarter by Russia’s naval blockade of its more important ports. Moreover, the domestic bond market has atrophied and Kyiv is cut off from the international capital market while the war uncertainties persist.

With budget spending running at some $9bn a month, according to the Ministry of Finance, but revenues down to some $4bn a month, the government has turned to the NBU that is now directly funding government expenditure by printing money. International donors have promised some $16bn in budgetary support, but distribution of that money has become bogged down in bureaucracy. Since the start of the war, Western donors have sent a total of $8.6bn to support budgetary spending, a sum dubbed “peanuts” by Elina Ribakova, deputy chief economist at IIF.

Despite the huge NBU rate hike, consumer price inflation rose again in June to 21.5% on an annualised basis, up from 18% the month before. The NBU’s ability to bring rates down will depend on foreign funding for the budget and while it is still printing money to fund the war inflation is anticipated to continue to climb.