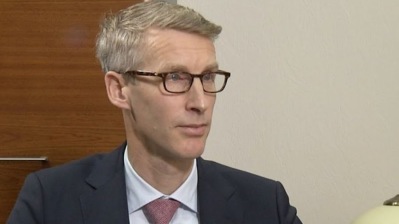 The IMF resident representative to Ukraine, Goesta Ljungman, fluffed the answer when asked whether the IMF's deal with Ukraine is still on track. Without the IMF's help Kyiv will find it almost impossible to meet its commitments this year.
By Ben Aris in Berlin July 31, 2020

After making Herculean efforts to pass the so-called anti-Kolomoisky banking law that was signed on May 18 and cleared the way to restart a new $5bn International Monetary Fund (IMF) standby agreement (SBA) this summer, the renewed deal already seems to have gone off track.

These fears were thrown into stark relief after the IMF resident representative to Ukraine, Goesta Ljungman, was asked if the deal had gone off the tracks this week. “I will refrain from answering. We have a programme with Ukraine. Under this programme it made a number of commitments,” Ljungman said.

Ukraine has already received the first $2bn tranche of IMF money but the remaining $3bn was already in doubt after Smolii was ousted. The latest comments only add to fears that the next tranches will be delayed.

Maintaining good relations with the IMF is critically important this year, as funding Ukraine’s debt obligations and raising money to cover a massive increase in spending to alleviate the impact of the coronacrisis is impossible without the IMF’s help.

Ukraine is going to struggle to finance its current budget. It has some $12.5bn in domestic and external debt to repay this year and also needs to fund a huge increase in the budget deficit.

In April the government decided to more than triple the deficit from UAH96 to UAH298bn, or from approximately $3.5bn to more than $10.7bn. That means that almost every fourth hryvnia of state budget expenditures in 2020 needs to be financed by attracting new debt.

The Ukrainian government is now aiming to attract UAH653bn ($23.6bn) – twice the amount of debt financing. And funding from international partners (mainly the IMF) has been the main reason that the Finance Ministry has been able to implement this plan so far.

But raising that money looks to be increasingly difficult. The Ministry of Finance managed to get at $2bn Eurobond away this week maturing in March 2033 at a 7.253% yield to maturity after the initial offer was cancelled after Smolii quit. More Eurobond issues remain a possibility but their pricing depends heavily on the state of the relations with the IMF.

More worryingly, foreign investors are leaving the domestic bond market. Last year Ukraine attracted some $5bn in foreign investment into the Ministry of Finance hryvnia-denominated OVDP treasury bills (OVDP) after the market was hooked up to the Clearstream international payment and settlement system. However, foreigners have been selling since March as the country was hit by multiple shocks. The share of foreigners in the OVDP market is down from a peak 15% in March to 11% now.

Ukraine's Finance Minister Serhiy Marchenko was quick to try to shore up confidence, telling Reuters on July 29 that the IMF deal remained “on track.”

"Ukraine continues to fulfil its commitments under the IMF memorandum," Marchenko said.

Smolii's successor, Kyrylo Shevchenko, has also tried to reassure investors and the IMF about stability and keeping the central bank independent.

FPRI BMB UKRAINE: Ukraine is successfully implementing the Association Agreement with the EU

FPRI BMB Ukraine: A shaky ceasefire is holding in Donbas for the moment
Ukraine’s banking sector starts to lose money in July
FPRI BMB UKRAINE: Ukraine is successfully implementing the Association Agreement with the EU

Musicians and festival organisers were angered by the government’s decision to maintain tough rules on concerts, while lifting the ban on sporting events.

FPRI BMB Ukraine: A shaky ceasefire is holding in Donbas for the moment
4 hours ago
Lukashenko cancels state of the nation speech as health fails
22 hours ago
Ukraine’s banking sector starts to lose money in July
2 days ago
Uzbek-born businessman and philanthropist Alisher Usmanov has donated $10mn to help Uzbek doctors
3 days ago
Festival organisers' hopes dashed as Hungary maintains restrictions on gatherings
3 days ago