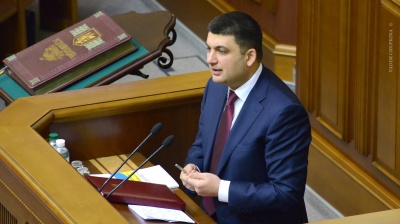 Ukraine’s cabinet agreed to increase domestic as tariffs by 23%
By bne IntelliNews October 19, 2018

Ukraine’s cabinet agreed to increase domestic gas tariffs by 23% at a meeting on October 19, fulfilling a key International Monetary Fund (IMF) demand that may release a badly needed $1.9bn tranche before the end of the year, local media reported.

Ukraine’s $17.5 IMF Extended Fund Facility has effectively been suspended for most of this year thanks to foot-dragging by the government over the implementation of reforms demanded by the IMF.

The government agreed to hike gas tariffs ahead of the start of the heating season last year, but reneged on the deal, which is seen as politically painful, at the last minute. In Soviet times heating and power were free, and most of the population in eastern Europe resent being asked to pay for them now.

With key presidential and parliamentary elections looming in 2019 the government has been putting off the increases to the last minute. The government postponed increasing the tariffs at the start of October, but now appears to have bitten the bullet.

Ukraine’s international reserves are sinking. The total has fallen below the three months of import cover economists believe is needed to maintain the stability of the hryvnia, which has been loosing its value against the dollar. Despite raising money on the domestic market, the government has been unable to raise enough from local investors to cover its debt obligations and has been slowly drifting towards a currency crisis.

There are still several hurdles to jump before the IMF will agree to release the next tranche. The government has also just passed the 2019 budget law in the first of three readings. The IMF insists that government spending be held to a deficit of 2.5% of GDP, despite the looming elections. While the version of the law passed this week is believed to be IMF compliant, the fund is unlikely to release any money until the bill receives its third and final reading, expected in December, because of Ukrainian politicians’ propensity for stuffing legislation with large and radical amendments during the subsequent readings.