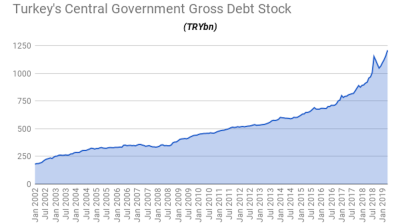 The government’s domestic debt stock rose by 5% m/m to TRY653bn in April, while the external debt stock grew by 4% m/m to TRY557bn.

In August 2018, the gross government debt stock jumped by 14% m/m due to the currency crisis. It then followed a path of recovery from September to November thanks to some recovery seen in the local currency.

Massive borrowings
Starting from November, despite widespread warnings, the Treasury—by now headed by President Recep Tayyip Erdogan’s son-in-law Berat Albayrak—took out massive borrowings in FX via eurobond sales and even via FX and gold-denominated domestic bonds right up to March when the anticipated market turmoil, following up on the economic strife of seven months’ back, arrived in the run-up to the March 31 local elections.

Consequently, the debt stock was registered at a record high of 1.16tn in March.

The Turkish government’s fiscal metrics are currently more vulnerable to a currency crisis than they were before last summer’s nasty episode—and fresh market turmoil laced with more lashings of lira weakness is expected by many observers to occur prior to the re-run of the Istanbul election on June 23.

The budget metrics are deteriorating sharply, and they are expected to worsen further prior to polling day.

Confidence in Albayrak low
Currently, foreign investors’ confidence in Albayrak is low and the external borrowing ability of the Turkish government is open to question, while the Treasury has systematically spooked both resident and non-resident private institutions on the domestic bond market because it resorted to manipulating interest rates in auctions and in the secondary market through public lenders.

There was recent speculation that the government was set to transfer a fresh sum of money to its budget from the central bank—reports said some TRY40bn would be drawn from its legal reserves—but the move was reportedly abandoned, with economists warning that it would undermine the national lender’s ability to defend the lira.

The governing AKP party is rather well-known for making last-minute amendments to laws under discussion in parliament. Perhaps Albayrak’s advisors are working on a new backdoor plan to provide a pre-election stimulus or on new borrowing. Given the latest setbacks in Turkey’s struggle for a recovery, the markets are—perhaps rather too politely—hinting that a fresh finance minister would be warmly welcomed, together with an economic recovery programme that can be taken seriously. But such a political mea culpa before polling day just ain’t on the cards.

Nato nerves on edge as France pulls out of sea operation in major row with Turkey over Libya
Turkey hit by VW’s scrapping of auto plant plan and refusal by Europe to list country as safe for tourism
Turkey’s Akbank sells $500mn of 5-year eurobonds at 6.80%