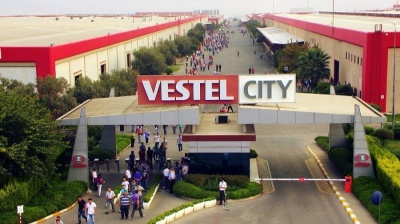 Is Turkish pre-election economic policy set to send many exporters over the edge? (pictured is the Vestel home and professional appliances factory in Manisa, western Turkey). / Teun1988, cc-by-sa 2.0
By bne IntelIiNews December 6, 2022

Turkish companies may lose their competitiveness on the international markets if Turkey’s minimum wage is hiked to around $500-$600, Mustafa Gultepe, president of the Turkish Exporters’ Association, TIM, has warned.

Noting that the minimum wage has been increased twice this year, in January and July, Gultepe noted: “Expectations [for a further hike] are running high but at a time when inflation is elevated.”

The Erdogan administration may feel under pressure to deliver a generous hike in the minimum wage with national elections due by June 2023, analysts note.

If the minimum wage was hiked to around $500-$600, Turkey would not be able to meet its target of generating $275bn in export revenues next year, Gultepe said.

Representatives from the government, the workers’ union Turk-Is and employers’ confederation TISK are to hold meetings to discuss the minimum wage on December 7. A further meeting is scheduled for December 14.

Gultepe also argued that in order for local companies to remain competitive, foreign exchange rates against the lira must increase as much as the inflation rate, which dipped to an official 84% y/y in November.

In the past two months, Turkish export growth has only been in the single digits, largely due to European markets sinking into recession, he added.

The lira in recent weeks has shown a sudden stability at around 18.60 to the dollar after a rollercoaster year, with the authorities using a battery of regulations to tightly control the exchange rate. The lira lost 44% to the dollar last year and declined by around another 29% this year to date before the decline was seemingly halted by the regulatory moves.

Reuters on December 6 reported Gultepe as saying in an interview that the exchange rate should be kept directly proportional to inflation levels, although he did not propose a specific lira level.

"In order for us to be able to compete and sell our goods, if inflation is for example 60%, then the exchange rate should move by 60%," Gultepe said. "Otherwise, the exports side and the production side comes to a halt."

"The important thing in the long run is to reduce inflation. But at points when you can't reduce it, the exchange rate must be supportive. Otherwise, we lose markets," Gultepe added.

MUFG Bank economists said in a December 6 note that despite the lira’s recent remarkable stability against the USD, risks remained heavily tilted to the downside for the currency.

They said: “According to Bloomberg, Turkey has stepped up interventions to support the Lira over the last couple of months which had raised total intervention close to USD100 billion through to October. The recent pick-up in intervention has coincided with further rate cuts from the CBRT [Central Bank of the Republic of Turkey] who have continued to lower rates despite elevated inflation.”

The note continued: “Looser monetary policy and credit growth is being deployed to support growth ahead of next year’s elections. Turkey is also acting to secure additional financing from Saudi Arabia and Qatar to support the Lira… We continue to expect recent TRY stability to be followed by further weakness.”