Turkey sees surprise drop in inflation to 16.6% in May 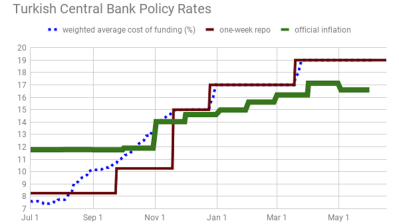 Turkey’s official inflation rate unexpectedly dropped in May to 16.59% y/y from April’s two-year high of 17.14%, with the statistics authority pointing to the impact of limited price increases seen during the extensive coronavirus lockdown that applied during the first half of the month.

The median estimate in a Reuters poll for was for 17.25% y/y. Consumer prices also officially rose 0.89% m/m, the Turkish Statistical Institute (TUIK, or TurkStat) said. The Reuters poll expectation was for 1.46% m/m.

The Turkish lira (TRY) has once more been on the ropes since mid-March when President Recep Tayyip Erdogan’s shock firing by decree of the country’s only recently appointed market friendly, hawkish central bank governor introduced fresh anxieties about premature monetary easing. The weakening of the currency prompted forecasts that inflation would rise in May because of the higher cost of imports priced in hard currencies.

The methodology used by the TUIK in calculating inflation remains subject to widespread criticism. The independent Inflation Research Group (ENAG), headed by Istanbul academics, produces its own calculations of Turkish inflation. For May, the ENAG consumer price index increased by 3.94% m/m.

In early May, the TUIK filed a criminal complaint against ENAG. Turkey’s finance minister Lutfi Elvan, who was asked about the move during a televised interview, said: “It's absolutely out of the question that the TUIK is playing with the numbers and that the [year on year] inflation rate is 30-40%.”

A further breaking down of the data showed that the decline in headline inflation was supported by a sharp drop in clothing inflation, from 11.0% y/y in April to 5.8% y/y in May. This shaved 0.4 pp off the headline rate. Transport inflation also fell back as unfavourable base effects caused by last year’s collapse in fuel prices started to unwind.

The producer price index (PPI) rose 3.92% m/m in May, the TUIK data also showed, for an annual rise of 38.33%. It is anticipated that this will contribute to headline inflation in coming months as input costs are reflected in consumer prices.

Central bank governor Sahap Kavcioglu attempted to ease concerns of premature easing during a June 3 meeting with investors, saying they were “unjustified”.

Jason Tuvey, senior emerging markets economist at Capital Economics, observed that the central bank in the past has started easing policy once inflation passed its peak. However, he added, the latest falls in the lira meant that the interest rate cut that Capital had pencilled in for this month now seems highly unlikely to materialise.

“We think that the CBRT [central bank] will heed President Erdogan’s recent calls for monetary easing by August,” he said in a note to investors. “And as inflation drops sharply towards the end of the year, aggressive interest rate cuts seem likely.”