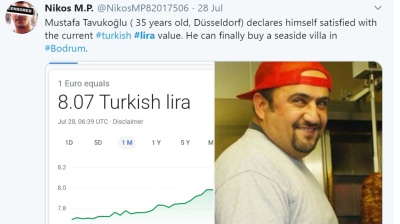 The Turkish lira (TRY) was back under pressure on August 5, sliding beyond the ‘red-line’ seven-to-the-dollar rate as analysts said Turkey’s money markets were starting to malfunction and market players again pondered whether the country can avoid another balance of payments crisis.

The word on the market was that the lira fell after Turkey’s Erdogan administration allowed flows of the Turkish currency on to the London offshore market—the previous day, Turkish officials had blocked such liquidity, but the response of offshore investors was to sell Borsa Istanbul equities and Turkish bonds in order to obtain lira, something that is said to have raised alarm in the Ankara presidential palace. As August 5 drew to a close, the officials appeared to have kept a measure of control on the lira—not yet into “fate of the Titanic” territory, it stood at 7.04 by the end of the day, having sunk as far as 7.08 at one point, some way short of its May all-time low of 7.27. The Borsa Istanbul BIST-100 index was still above the important 1,000 mark by the close of trade.

Through most of June and July, Turkish authorities succeeded in keeping the dollar to less than 6.85, burning up huge amounts of FX reserves in the process and introducing restrictive regulations on banks and the market at every turn to head off trades that might weigh on the lira. But the lira broke past that unofficial peg last week. On August 4, as officials withheld lira liquidity from the London offshore market, the costs of borrowing the currency overnight took a giant leap to close to the record intraday highs struck in March last year when Ankara, during a crucial local elections period, engaged in the same practice. The offshore overnight swap rate, namely the cost to investors exchanging foreign currency for lira over a given period, jumped to an annualised level of more than 1,000% from 30% on August 3.

At that point analysts and investors appeared to be almost throwing in the towel on the lira, saying the overnight rate was hitting levels usually only seen in times of general and severe market stress and that the swap rate signalled that Turkey’s money markets were increasingly dysfunctional, triggering new risks for both the currency and other assets.

Economists have said that when the swap market is de facto frozen, there is bound to be big selling in Turkish stocks and bonds because foreign investors need to move fast to meet their lira liabilities. The BIST-100 lost more than 3% on August 3, while the prices on lira-denominated debt fell, pushing yields higher. The yield on a 10-year, lira-denominated sovereign bond reached 13.4% on August 4, its highest level since the global market turmoil in March.

Turkey’s economic turmoil has led global finance journals to question whether it can still sell eurobonds.

The Financial Times reported on August 5 that Goldman Sachs had estimated that in the first six months of the year, Turkey’s central bank spent more on propping up its currency than during the whole of 2019, with $65bn of reserves deployed compared with $40bn last year.

Timothy Ash at BlueBay Asset Management said late on August 5: “Turkey - another $1bn used by state banks today to defend the lira and it still lost 2% on a day when the $ was weak. A huge price is being paid for [Turkish President Recep Tayyip] Erdogan’s aversion to interest rate hikes - massive loss in FX reserves. Peoples FX deposits being spent.”

“The Turkish lira could be on the brink of yet another precipitous fall versus the dollar,” Piotr Matys, a strategist at Rabobank, said in his response to the latest lira woes.

Fluctuations in the lira over the past two weeks suggested that the state lenders that act on behalf of the central bank to back the lira were “struggling” to keep it from falling more aggressively, he added.

The dollar has gained more than 18% since the start of the year against the Turkish currency. If the situation deteriorates much further, Turkey may have no choice but to bring in emergency rate hikes and perhaps overt capital controls, analysts advise.