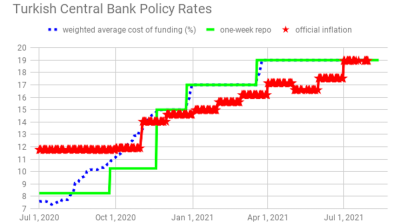 Turkey’s official annual inflation moved up to a fresh two-year high of 18.95% in July, placing it a sliver below the country’s benchmark interest rate of 19%, according to data released on August 3.

The figure stood at 17.53% in June and 16.59% in May against an official inflation target of 5%. The latest print, beating the consensus forecast for 18.5%, offers another indicator that a quiet desperation is setting in at the Turkish central bank, under pressure from the populist president, Recep Tayyip Erdogan, to deliver rate cuts. Last week at a press conference, the regulator’s governor, Sahap Kavcioglu, bemoaned the central bank being left alone in the fight against inflation, arguing that structural issues needed to be addressed and that companies should raise prices in an “appropriate way”. That brought a dismissive response from Capital Economics, which said that “households and firms are simply responding to the conditions in front of them and the central bank bears a lot of responsibility for failing to anchor expectations”.

The latest inflation data from the Turkish Statistical Institute (TUIK, or TurkStat) also showed that in July consumer prices officially rose 1.80% month on month. That compared to a Reuters poll forecast of 1.54%. The monthly rise was driven by the food, housing, restaurant and hotel sectors.

“Mr. Kavcioglu was appointed [in March] in the knowledge that he would heed to President Erdogan’s demands for lower interest rates. One consequence is that Turkey is one country where transitory factors currently pushing up inflation become permanent, forcing the central bank to keep rates high for a prolonged period of time,” Capital added, following Kavcioglu’s press briefing remarks of last week.

After the inflation data was released, Burumcekci Consulting’s Haluk Burumcekci was quoted by Reuters as saying that even without a loss in lira value, inflation may rise to 19-20% in the next three months, with a fall coming only in the final two months to end the year at 17-18% at best. If a value-added tax discount due to end in September was not extended, this could exert an upward impact of around 1 percentage point on inflation, he said, adding: “As a result, because we think the inflation outlook will not allow the central bank to cut interest rates this year, we do not expect a change in rates in August or the following meetings.”

In a caveat, Burumceki said that if the lira’s recent modest recovery persisted, annual inflation could fall with the base effect, hence the possibility of moderate rate cuts being on the table in the fourth quarter could not be completely excluded.

Also subsequent to the publishing of the July inflation reading, JPMorgan scaled down its Turkish interest rate cut forecasts, while Goldman Sachs flagged the risk of smaller and later rate cuts, which would be beyond the fourth quarter. JPMorgan had previously pencilled in three 50 bp cuts for October, November and December, respectively, but it switched to a forecast of two 50 bp cuts in the last two months of the year, according to a research note from JPMorgan economist Yarkin Cebeci.

"We see the policy rate at 15.0% (up from the previous forecast of 14.5%) at the end of 2022, but as always, a series of factors—macroeconomic and political in nature—create significant uncertainties," the note from Cebeci said.

Scope Ratings also scaled down its interest rate cut forecasts. It said stubbornly high inflation was likely to limit easing to 17%, rather than 16%, by the end of the year. "Rate cuts are clearly off the table in Turkey until the autumn, if not winter at earliest," said Scope's director of sovereign and public sector ratings Dennis Shen.

Surveys show that few Turks believe the veracity of the official inflation data, perceiving that inflation in their day to day lives is far higher.

Veli Agbaba, vice chair of the main opposition Republican People's Party (CHP), took up this theme as he went on the offensive in his comments on the inflation announcement. Stating that 18.95% was the highest July annual inflation rate experienced in Turkey for 18 years, he claimed that in the past year the price of sunflower oil in the country has increased by 60%, while the prices of chicken and margarine grew 49%, bianet reported. Also according to Agbaba, the price of eggs rose in the past year by 27%, while the price of bread moved up by at least 22%.