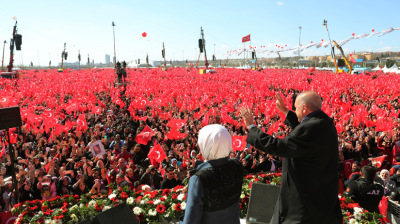 Erdogan takes the plaudits at an election rally in Istanbul on March 24. / Turkish Presidency.
By bne IntelliNews March 24, 2019

Turkey on March 23 initiated investigations into JPMorgan Chase & Co as well as other unspecified banks that its banking regulator criticised for exploiting and aggravating the biggest plunge in the Turkish lira (TRY) seen since last summer’s currency crash.

The Turkish Banking Regulation and Supervision Agency (BDDK) said two JPMorgan analysts on March 22 put out a research note that advised selling the lira against the dollar with content that was “misguiding and manipulative”. That content, it alleged, caused volatility on the markets and damaged the reputation of Turkish banks. Turkey’s Capital Markets Board said in a statement on its website that it too had begun an investigation on similar grounds.

Strongman Turkish President Recep Tayyip Erdogan, meanwhile, warned bankers that there would be “a heavy price” to pay after the March 31 elections, a contest which is seen by many as a referendum on his 16 years leading Turkey given questionable economic stewardship from the Erdogan administration which many analysts largely blame for last year’s currency crisis and the ongoing recession afflicting the country.

On the evening of March 22 after the rout that hit the lira, bonds and the stock market, Erdogan’s son-in-law and finance minister Berat Albayrak took to the airwaves for a joint live broadcast made by several TV stations loyal to the president. Speculators were talking down the economy on social media and this was similar to what happened during the anti-government Gezi Park protests in 2013, he said. Albayrak did not offer examples or names.

Just lately, Albayrak was making fun of those who bought dollars at 6 lira, saying that it was unwise because everything would be so much better after the elections and the worst of Turkey’s economic turmoil had been over and done with since last September. He even went so far as to claim that inflation, currently a touch below 20%, would be in the single digits six months from now.

Erdogan has several times in the past year accused shadowy foreign players of waging “economic warfare” against his country.

HSBC chief to stand trial for insulting Erdogan
In early February, it was reported that Selim Kervanci, the CEO of HSBC Holding’s Turkish unit, is to stand trial over allegations that he insulted Erdogan during the Gezi Park demonstrations.

Kervanci was being investigated by a state prosecutor’s office over a video he retweeted during the 2013 Gezi protests. The clip was from the 2004 German movie “Downfall,” set during Adolf Hitler’s last days and depicting the collapse of Nazi Germany. An indictment, seen by Bloomberg, alleges the video that Kervanci shared on social media offended Erdogan by drawing parallels with Hitler.

Insulting Erdogan or other public officials is a crime in Turkey.

The country was again deemed “Not Free” by the latest Freedom in the World survey, released on February 4 by US-based watchdog Freedom House. Turkey lost its "Partly Free" status in the 2018 edition of the ranking. Its freedom ratings fell during the two-year-long state of emergency imposed after the July 2016 coup attempt.

Turkey has also in recent years become the biggest jailer of journalists in the world.

A spokeswoman for JPMorgan declined to comment when approached by Bloomberg for a reaction to the announced BDDK and Capital Markets Board investigations.