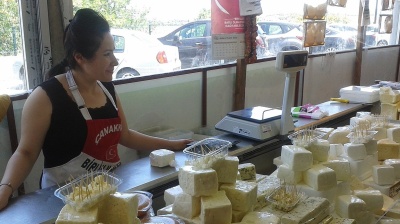 Polls have consistently shown Turkish consumers do not believe the inflation readings put out by the official statistics body. / E4024 cc-by-sa 4.0.
By bne IntelIiNews April 14, 2022

Turkey looks set to bring in prison sentences of up to three years for economic researchers who publish unofficial data on inflation and other indicators without first obtaining the approval of the country’s statistics agency. Bloomberg reported on April 14 that it had seen a draft law to that effect.

A particular thorn in the side of the Erdogan administration is the Istanbul-based Inflation Research Group (ENAG), led by academics. Its work suggests that the official picture of inflation presented by the Turkish Statistical Institute (TUIK or TurkStat) does not correspond to reality. The latest TUIK inflation data, covering March, shows official annual inflation at 61%. ENAG’s calculations show 143%.

Opinion polling has consistently shown that few Turks believe the official inflation data. For many months now, bne IntelliNews has presented the ENAG inflation figure alongside the official figure.

The draft bill also foresees broadcast bans for websites that publish unapproved statistics. ENAG publishes its data on its website as well as on its Twitter account.

In May last year, TUIK filed a criminal complaint against ENAG, which it alleged was “purposefully defaming” the national statistical institution and “misguiding public opinion”.

The inflation narrative has become particularly sensitive in Turkey this year as the country has gone into election mode. Presidential and parliamentary polls, which will be held in tandem, must by law take place by June 2023 at the latest. A big issue for voters will be whether President Recep Tayyip Erdogan is guilty of economic mismanagement. Erdogan often argues external factors are responsible for Turkey’s difficulties, but the country has essentially been mired in an economic crisis for several years.

Bloomberg said Erdogan’s governing Justice and Development Party (AKP) had planned to submit the proposed legislation on the dissemination of unofficial statistics to parliament this week, but was holding off while officials do further work on it. It cited two unnamed AKP officials as relaying the situation.

The draft law seen by the news agency would bar researchers from publishing any data on any platform without seeking approval from TUIK. The state organ would be provided with two months to assess the methodology behind the data. Those found guilty of violating the law may face between one and three years in prison.

“Some of the manipulative statistics presented to the public under the name of scientific study without a clear methodology target both the Turkish Statistical Institute and the confidence in economic indicators,” the draft was reported as stating.

After he was served with court papers in January, ENAG’s director, economist Veysel Ulusoy, told Al-Monitor: “The public was so interested in having this kind of [inflation[ data rather than Turkstat’s false signals.”

He added: “We knew that something was wrong and the inflation basket was misleading the public. Public support was the main thing that took ENAG to the next stage.”