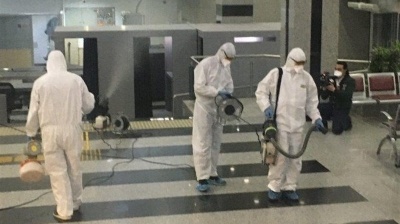 An anti-coronavirus sanitation team at work in Istanbul. / Tasnim.
By bne IntelIiNews March 18, 2020

President Recep Tayyip Erdogan said on March 18 that Turkey will postpone debt payments and cut tax burdens in various sectors as part of a Turkish lira (TRY) 100bn ($15.4bn) package drawn up to bolster the economy in the face of the coronavirus (COVID-19) crisis.

At a news conference held before Turkey announced its number of confirmed COVID-19 cases had in one day grown from 98 to 191, Erdogan called on banks not to limit loans and for companies not to shed jobs.

Debt repayments of companies affected by the coronavirus would be postponed for a minimum of three months, while value-added tax (VAT) and social security payments for various sectors would also be deferred, the presidcnt added.

VAT for domestic aviation will be cut to 1% from 18—a move that will help Erdogan meet his pledge to support flagship carrier Turkish Airlines—and there will be a doubling to TRY50bn in the limit of the Treasury-backed credit guarantee fund. It guarantees loans to small and medium sized firms and came in for big criticism for loose lending after Turkey’s economy overheated in advance of its summer 2018 currency crisis (the lira has now lost more than 40% of its value against the dollar since the end of 2017, including an 8% decline this year).

Another specific measure outlined by the president will see Turkey suspend its accommodation tax until November to back the country’s key tourism sector, which accounts for 12-13% of its economy.

No instruction to stay away from work

In further remarks on the coronavirus emergency, Erdogan advised Turks not to leave home unless necessary for three weeks and to minimise social contact until the threat of the coronavirus recedes. However, he did not tell them to stay away from work.

“None of our citizens must leave their homes or get into contact with anyone, unless absolutely necessary, until the threat disappears,” Erdogan said in a speech after a meeting of top officials in Ankara to tackle the virus outbreak. “Our citizens who are going to their offices should directly return to their homes at the end of the business day,” he added.

Separately, Toyota Turkey said it was suspending production amid the coronavirus pandemic.

The Japanese automaker’s Turkey units would freeze production for at least two weeks, with plant closures made necessary by the company effort to protect its workers from the virus, Toyota Turkey added.

“We will re-evaluate the situation after this two-week suspension period,” it said.

Earlier this week, another Turkish automaker, Ford Otosan, said it would cease operations between March 30 and April 4 because the company has encountered problems sourcing supplies from abroad.

Officials from three other major automakers in Turkey, namely Honda, Hyundai and Renault, told Dunya business daily that they had not yet decided on whether to introduce production suspensions.