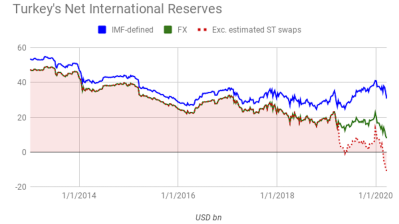 The Turkish central bank’s open swap positions with maturities of up to one month jumped to $18.8bn in February from $9.95bn in January, data from the national lender showed on March 26.

The central bank has also ramped up its swap transactions since the coronavirus (COVID-19) outbreak began casting the world into a health and economic crisis in March, but the official data on the extent of the moves will only arrive in April.

The significant jump in open swap positions coupled with the ‘COVID-19 sudden stop’ in financial flows to emerging markets have caught attention and heightened jitters.

The latest weekly data from the central bank also showed that net portfolio flows to Turkey remained below zero for 13 consecutive weeks from December 20 to March 20, while the total volume amounted to $6.18bn.

The Financial Times (FT), which shone a light on the Turkish central bank’s dubious FX reserve activities back in April last year, when the jiggery-pokery began, on March 27 ran a story entitled “Turkey’s borrowing masks ‘significant’ decline in forex reserves”.

Miscellaneous calculation methodologies are used by observers in the hunt to identify the real situation as regards the central bank’s ammo because officials privy to what is occurring repeatedly fail to heed calls to provide a clear picture.

The FT calculated that the regulator’s net FX reserves stood at just $1.5bn as of February, but this figure includes gold reserves and avoids the public’s deposits held at the central bank.

At bne Intellinews we prefer to use the IMF-defined net reserves, including the public’s deposits. At the same time, we deduct the net gold reserves (assuming that it is not possible to, at a moment’s notice, turn the gold bars, transported to Ankara from Washington and London following the failed coup attempt in 2016, into cash, particularly with the current coronavirus woes roiling the financial markets) and short-term swaps (of up to one-month) from this IMF-defined figure in the quest to assess just what the central bank’s potential is in defending the local currency.

Our indicator fell into “minus territory” as of February 28 and stood at -$10.8bn, avoiding the swap transactions across March, as of March 20, according to the latest data.

Having said that, it should be underlined that the mainstream approach holds sway as most analysts still persist with old habits, but the approach overlooks the fact that the Turkish government has treated local lenders’ FX as its own since April last year and, following the collapse of the global economic system (you can argue that it is a temporary phenomenon brought about by COVID-19, but others can argue that the system was so fragile that it was only ever one destabilising event from hitting the canvas and that it might never get back to its feet, corona or no), it now has expanded options to expropriate whatever it wants.

Additional official figures suggest that the central bank’s gross FX reserves, excluding gold, fell by $7bn w/w to $65.1bn as of March 20, the lowest level since 2009.

It is hard right now to identify which indicators we will in the new era watch with most interest as regards the destiny of the Turkish lira (TRY). But at first glance, the foreign trade deficit figures—not the ‘general trade system’ but the ‘special trade system’ figures—for March, and subsequently for April, may offer up an idea when it comes to Turkey’s sine qua non FX needs.

Turkey has more than $150bn worth of FX debt to be rolled over this year, and the direction that small matter will take is also shrouded in mystery given the dust around from the cataclysm that’s hit economies and the financial markets. Will any Turkish FX borrowers fall into default, or will the creditors prefer to keep looping the debt loop?

Since the beginning of March, many other countries have been employing direct interventions in the FX market to defend their currencies against the strengthening USD.

“Many central banks intervene to ease volatility when it comes to exchange rate movements, but Turkey does not have sufficient reserves for a more prolonged defence of the currency,” Paul Gamble of Fitch Ratings told the FT.

Since last week, its appeared that cash mania, still hooked of course on the USD, has been turning into gold mania following the Fed’s open pledge to provide limitless cash to the financial system, but it’s really quite tough to predict the magnitude of help this will provide the lira.

“In a market shutdown, [Turkish] banks' external debt service requirements, net of more stable sources of funding, would be about USD35 billion-USD40 billion in 2020. Available FC liquidity of about USD81 billion would be sufficient to redeem maturing market borrowings and cover about 20% of FC deposits. Based on data to 18 March, both lira and FC customer funding has been stable,” Fitch said on March 25 in a non-rating action commentary entitled “Coronavirus Affects Turkey via Funding Conditions, Bank Metrics”.

“The likely plunge in tourism revenues (USD25.7 billion in 2019, net) and foreign demand for exports will outweigh gains from lower energy imports, which were USD41 billion in 2019,” according to the rating agency.

The latest data also suggested that overall FX deposits held in the Turkish banking system fell by $2.5bn w/w to $198bn as of March 20.

“And it seems that FX deposits left the system as [Turkish] locals I assume tried to get cash FX given concerns over C virus,” Timothy Ash of BlueBay Asset Management said in an emailed note to investors.

Meanwhile, headlines asking “Are banks not shouldering the responsibility?” are on the rise again in the Erdogan media.

The Turkish government may need to take a harder stance to avoid a bank run and also to make lenders stimulate the economy in the days ahead, but it is hard to estimate—yes, apologies amid the carnage (“Things’ll never be the same, Lassie”), it is unfortunately hard to estimate everything at the moment—the side effects.