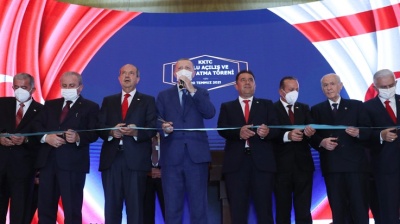 Erdogan, centre, seen on July 20 at a opening ceremony for the restored Bilal Aga mosque in Maras, Northern Cyprus.
By Akin Nazli in Belgrade July 22, 2021

The Turkish parliament has approved an omnibus bill that includes articles to extend state of emergency practices, bianet reported on July 19.

Accordingly, the maximum period of a detention without an arrest will stay at 12 days (an initial four days is provided, with the option of two extensions) until at least July 31, 2022.

President Recep Tayyip Erdogan will, meanwhile, retain the power to fire, discharge or demote public officials at least until that date. Additionally, Erdogan will for at least three more years be able to seize companies via the appointing of the Saving Deposit Insurance Fund (TMSF) as a trustee. That power now has an expiry date of July 31, 2024.

Erdogan’s Justice and Development Party (AKP) initially aimed to extend all the powers by three years, but it later reduced its demands on detention periods and the dismissal of public officials.

On July 20, 2016, four days after the Erdogan administration survived a coup attempt, Turkey declared a state of emergency. Under the law, the emergency regime could only be brought in for a maximum three months. However, it was subsequently extended by as many as seven times, meaning the state of emergency lasted until midnight on July 18, 2018.

On July 25, 2018, the parliament approved a security law to replace the state of emergency for a two-year period. It is that law that the omnibus bill extends and updates.

The opposition two years ago protested that the security law would mean a permanent state of emergency in the country, while at the same time the AKP set out to convince the population and observers that the state of emergency was over. Many international news services have indeed ever since reported on Turkey as if it is not subject to sweeping emergency powers.

“I don't think the AKP government will ever abandon these powers,” a human rights lawyer told Al-Monitor on July 15, ahead of the approval of the omnibus bill at the parliament.

The latest extension of the ‘undeclared state of emergency’ will pave the way to holding parliamentary and presidential elections possibly under de facto emergency powers, the Human Rights Foundation said on July 13 in a statement.

With or without the legislation on the state of emergency powers, it is questionable, however, whether, when and how the next elections will be held in Turkey. Erdogan has recently talked of not handing the country over to people without a responsible plan for the future.

“The extension of these emergency powers would effectively make permanent the state of emergency… This is a blow to the rule of law that in Turkey has been effectively trapped in limbo for the last five years,” the International Commission of Jurists said on July 14 in a statement.

“There is absolutely no legitimate justification for continuing the state of emergency today, just as there was not in 2018 when these powers were renewed unnecessarily. The renewal of these powers long after the 2016 emergency, without good reason, is unnecessary and disproportionate, and runs counter to Turkey’s obligations under international human rights law… The rule of law has been suspended in Turkey for the last five years, and any day without it is a day too much,” it added.