Any foreign visitor surveying the many and varied cafes on the ground floor of Budapest's WestEnd City Center on a midweek September afternoon might conclude that the Hungarian economy is booming – such is the buzz from the well-filled tables at what is, after all, hardly the retail rush hour.

It's the kind of scene that makes Sandor Nyul smile with satisfaction: “In our lives, cash is number one! That's important for 2015, and forever,” he chuckles in his office, just 100 metres from this consumption extravaganza.

Nyul, for a few more weeks at least, is chairman of the board of TriGranit Development Corporation, the Budapest-based developer that built and owns WestEnd. His job is changing because TriGranit is currently being sold to TPG Real Estate (TPGRE), the property arm of TPG, a major US private equity outfit with total assets of $75bn.

The deal, estimated at around €600mn in media reports, an amount Nyul calls “about right”, means TPGRE will acquire the TriGranit name, management team, its extensive Polish and Slovakian real estate portfolios, along with some Hungarian and Croatian assets, according to a joint press release issued on August 10.

TPG – already present in the region after buying Prague-based PointPark Properties (P3), an industrial development in 2013 – said that, backed by new capital, it plans to create the “leading real estate investment, development and management platform” in Central and Eastern Europe. “With the favourable macro and real estate trends in the region… we see a number of opportunities to expand,” Anand Tinani of TPGRE was quoted as saying in the press release – although Tinani's position at TPGRE was not revealed.

In fact, not much is known about TPGRE. The financial closure of the deal is expected by the end of September, but TPGRE is otherwise strictly silent: a search on the company's website failed, even, to locate news of what is certainly the biggest transaction in Hungary this year.

However, the bustling WestEnd mall and a number of other cash-generating assets are not part of the deal, and will continue to be managed by the newly formed Granit Management – the slimmed down rump of TriGranit – to the eminent satisfaction of Nyul, who will be moving to the new company.

The essential message is that Sandor Demjan, arguably Hungary's most successful businessman and the main driver behind TriGranit, is not only hanging around, but plans another wave of new developments via Granit Management, which he will continue to head. “We have not committed to any non-competition activities [with TPGRE], except in one city, [Poland’s] Krakow. So we are able to go on with the nine countries where TriGranit has been active. We believe we will still have the focus on Poland, naturally Hungary, and we feel Romania is coming up,” Nyul says, then throwing in Russia and Serbia for good measure.

So why, then, did the current owners commit to the current sale, which includes the much-touted Bonarka City Center, a €250m mixed-use development, plus the adjacent business towers, in Krakow; along with the similarly mixed-use €48mn Lakeside Park project in Bratislava, Slovakia? “It was a very unique offer. We were not pushing to sell,” Nyul insists. “Naturally, we had a lot of debates, but the whole package, the TriGranit brand, the key management team, the offices, retail and sites was unique. And after the Poznan deal [referring to the sale of Poznan railway station development in 2014], some of our shareholders were keen to cash out.”

Currently, the shareholders of TriGranit are Sandor Demjan, Sandor Csanyi (chairman/CEO of OTP Bank), Canadian businessman Peter Munk, and Immofinanz of Austria, listed on the Vienna Stock Exchange. With the completion of the TriGranit sale, Demján and Csanyi will acquire the shares of Immofinanz and Munk in the remaining Granit Management.

Despite the sale, Granit Management will still hold assets worth some €1.5bn, Nyul says. Along with WestEnd – which boasted a record 23mn visitors last year, the best performing mall in Hungary – these notably include the Palace of Arts, Papp Laszlo Sports Arena and Polus Office tower in Budapest; the mixed-use Arena Centar in Zagreb and potentially valuable projects such as the stalled Emonika railway station development in Ljubljana (see below). “Granit will focus in future on housing and mixed-use developments,” says Nyul.

Combined with excellent transport connections – it was to be built atop the Slovene capital's railway station – it was supposed to meet and better the greenest of green requirements in the green-fixated Alpine state.

Eight costly years of wrangling later, and TriGranit, the developer, is left with, as Sandor Nyul puts it, “A €36mn big hole”. “It's not easy anywhere in the world to make an agreement with a municipality and the state railway company,” he explains.

But that could all change. An arbitration court in Austria is expected to give its verdict by the end of September on who is responsible for what regarding the Emonika debacle, and Nyul is hopeful of a favourable result. If so, rather than extracting a financial payment, the Hungarian developer will use the ruling to push the project forward. “If the decision is beneficial to us, it will leave us in a a good position for further negotiation,” he says.

According to the TriGranit website, Emonika at this stage will have a gross leasable area of 96,300 square metres, and the development cost has risen to €350mn. Phase one is now due to open in 2017, nine years later  than originally planned. If so, as Nyul puts it, “The city of Ljubljana will have a lovely centre”. 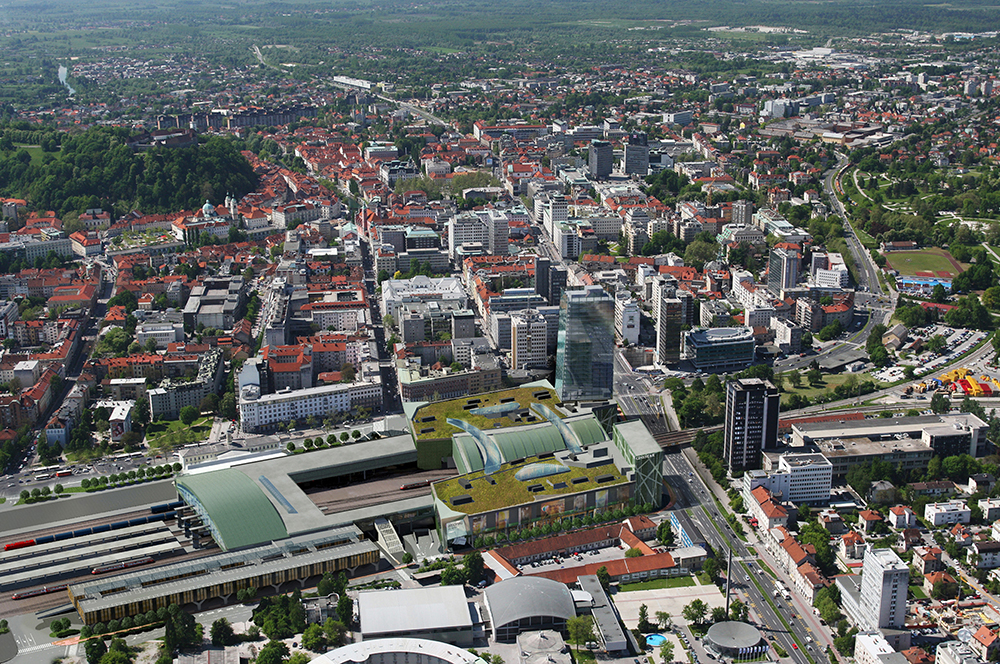 bne IntelliNews -   Central and Eastern European leaders blasted Russian "aggression" on November 4 and called for Nato to boost its presence in the region. The joint statement, issued at an ... more