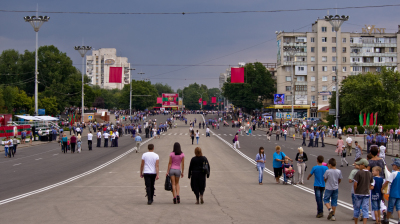 The government of Transnistria is teetering on the edge of insolvency, as Moscow turns the screws ahead of presidential elections this autumn at which opaque economic groups will battle for the right to plunder the Moldovan enclave.

Russia has defended Transnistria militarily and kept it afloat economically since it broke away from Moldova after a civil war in 1992. Typically, Russia has provided some $100mn per year (10% of the enclave’s GDP) but the subsidy was suspended last year as a signal of Moscow’s displeasure with executive President Evgheni Shevchuk, who is haemorraging public support and accused of siphoning off Russian aid.

The suspension of aid has plunged the enclave’s $1bn economy into economic crisis, worsened by a slump in exports caused by the economic downturn in the whole CIS region. Transnistria’s GDP plunged some 20% y/y in 2015, according to Expert Grup think tank in Moldova.

Moldova itself is Europe’s poorest country and has suffered severe emigration problems since the collapse of the Soviet Union. In Transnistria the population has decreased by 14.3% since 2004, according to a 2015 census.

The central bank recently announced that a shortage of foreign exchange reserves has made it practically impossible to maintain the fixed exchange rate of 11.3 Transnistrian rubles to the US dollar.

The central bank has proposed a 12% devaluation of the local currency, but parliament, which has been dominated by the opposition Obnovlenie party since elections last autumn, has rejected the proposal. Instead the government has allowed the central bank to take 100% of exporters’ foreign exchange earnings, compared to the 25% mandatory rate levied currently.

Last year the Shevchuk-led government had to slash public sector wages, pensions and social benefits by some 30%. It also has outstanding debts of $5bn for the natural gas delivered by the Gazprom-controlled Moldovan natural gas transport company Moldova-Gaz.

This year the budget has fallen victim to the dispute between the president and the parliament, as both sides get in the trenches ahead of the presidential election.

Parliament has rejected the president’s 2016 budget and has instead proposed its own spending plan that, according to the president, would be almost double forecast revenues. The president vetoed on April 29 key paragraphs of the parliament’s budget plan, saying it overestimated revenues by 1.1bn Transnistria rubles from the government’s original plan of RUB1.4bn ($124mn).

For their part, Obnovlenie – which is financed by the enclave’s dominant economic group Sheriff – accuses Shevchuk of treason and of allegedly siphoning  off $100mn from the state budget, accusations he denies.

The current events are strikingly similar to the developments in 2011 when Shevchuk replaced (with the support of Russia and Sheriff) his predecessor Igor Smirnoff, who had lost Moscow’s favour for allegedly siphoning off public money, as shown by this wikileak note.

Sheriff was established in the early 1990s by Transnistrian military officers turned entrepreneurs Viktor Gushan and Ilya Kazmaly. Now it is formally owned by Gushan alone. The real owners have never been disclosed, though they are believed to be Russian.

Sheriff has extended short-term interest-free loans to the government, which come due just before the poll. The two loans, worth a total of $32.2mn, are being used to repay wages and pensions that were missed last year and to finance subsidies to cut the natural gas and electricity prices charged to rural households.

The government has also turned to Moldova, which has renewed the contract with Transnistrian power group Cuciurgan, still one of the country’s major power companies and the enclave’s main source of foreign exchange.

The price was re-negotiated at 28% below the price charged in 2015, but Moldova’s imports of electricity at this price would still amount to some $150mn this year.

The gas-fired power plant is owned by Russia’s Inter Rao group but an offshore entity, Energokapital, operates as an intermediary. Energokapital was founded in October 2014 by individuals close to President Shevchuk, Mold Street reported.

Energokapital takes natural gas from Gazprom via Moldova-Gaz and Tiraspol Transgaz, which is provided for free, and sells the electricity to Moldova. It is unclear how the big profits made are shared between Energokapital and Transnistria’s budget.

Recent media investigations also allegedly revealed connections between the owners of Energokapital, and companies involved in the siphoning off of  $1bn from Moldovan banks. Whether there is an ownership connection, or the two have used the same shell companies in UK, remains unclear.

International Ice Hockey Federation (IIHF) has stripped Belarus of the right to hold the World Championship this year
4 hours ago
Russian opposition activist Navalny calls for supporters to take to the streets this weekend
14 hours ago
Armenia ‘to extend life of its 1970s Metsamor nuclear power plant after 2026’
11 hours ago
Turkcell denies any affiliation with $1.6bn loan in default extended by Ziraat Bank to Virgin Islands company
2 days ago
Bulgaria’s government considers gradual easing of COVID-related restrictions
21 hours ago