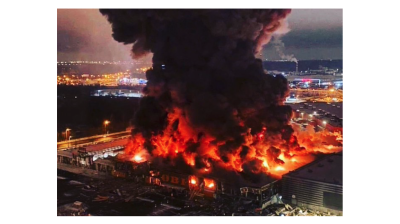 Three large fires broke out over the weekend in Moscow, raising suspicions of a Ukrainian arson attack, but investigators say the most probably cause was simply electrical faults in at least two of the fires. / bne IntelliNews
By bne IntelliNews December 11, 2022

Fire consumed the OBI shopping mall at the Mega retail complex in the Khimki region of Moscow not far from capital’s main airport, Sheremetyevo International Airport.

And a third broke out at the Pushkin national art gallery in central Moscow, although none of its world-famous art was destroyed, according to preliminary reports.

The Pushkin is the largest museum of European art in Moscow and one of the leading destinations for tourists, who come to see its world-class collection of international masters. Officials said that one firefighter was injured while tackling the blaze at the art museum.

The Pushkin Museum houses international masterpieces by Rembrandt, Cezanne, Degas, Vincent Van Gogh and others. However, the fire was not at the main building but the former Roerich Museum, also called the Lopukhin Estate, a separate building that is currently empty, as it was due to be renovated as part of Pushkin’s “Museum City.” The Roerich museum was previous seized by the Russian state in 2017, as it had housed paintings bought by the collapsed Master Bank in a fraud scheme.

The fire at the old manor house dates back to the late 17th century and reportedly began between the floors; a preliminary investigation has not ruled out arson, but investigators say that an electrical fault was probably to blame. The aforementioned firefighter was injured when a ceiling collapsed on him.

The story is similar with OBI, where arson has not been ruled out, but there too, investigators say an electrical fault probably caused the conflagration. The huge fire ripped through the major shopping complex, killing at least one person, according to Russia's Emergency Situations Ministry.

No information has been released as to the likely cause of the fire at the meat plant. Emergency services said 13 people were evacuated from the building, and no one is reported missing. There is currently no information about injuries.

The fire at the Mega retail complex is emotive, as it is also home to Russia’s first IKEA store that opened the same month as Putin was elected to his first term in office, and a historical milestone in the growth of the IKEA Empire. The opening of the store is widely seen as marking the end of the economic chaos of the Yeltsin era and the start of Russia’s decade-long boom throughout the noughties that transformed the country.

The symbolism of this landmark going up in flames has been taken by many commentators as a suitable symbol for the effect Putin’s war on Ukraine is going to have on the lives of ordinary Russians going forward.

Russia was hit by a wave of explosions and fires in the spring that destroyed several factories and oil refineries across the country. While the cause was not determined, Ukrainian partisans posted pictures of blocks of C4 explosives and threatened to attack Russian installations; however, the Kremlin has not confirmed that any of the incidents were the result of terrorist attacks.

Two operations have more clearly been blamed on Kyiv. A huge explosion destroyed planes and the runway at a Russian air force base in Crimea in August, which was attributed to Ukraine special forces. That was followed by the Kerch Bridge bombing on October 8 that did considerable damage to the structure that was personally inaugurated by Russian President Vladimir Putin.

Kyiv has not commented on either incident, nor has it publicly taken credit for either attack.

But more recently Kyiv has taken its fight into Russia proper with an attack on three airfields in the last week that some analysts say has taken the war into a new phase.

There have been three other notable fires in Russia. In March 2004 on the day of Putin’s second presidential re-election a fire broke out at the Manezh hall under the Kremlin’s walls and just outside Red Square. Firefighters struggled to prevent the blaze spreading to the surrounding buildings in the historic heart of the Russian capital. One firefighter was killed when part of the burning building collapsed on him.

But the most tragic fire in Russia’s modern history was the Winter Cherry shopping mall in the Siberian city of Kemerovo that killed 64 people, including 41 children, a month after Putin was re-elected president in 2018. Putin flew to the scene to console angry crowds and relatives after it emerged that standard safety precautions had been widely ignored. Rallies in memory of the victims were held in several cities around Russia, and at least one, in Moscow, turned into an anti-government demonstration.

Investigators said fire exits had been illegally blocked, the public address system had been switched off, the alarm system was broken, and children had been locked inside a cinema. The fire swept through the upper floors of the shopping centre, where a cinema complex and children’s play area were located, on a busy Sunday afternoon in March.