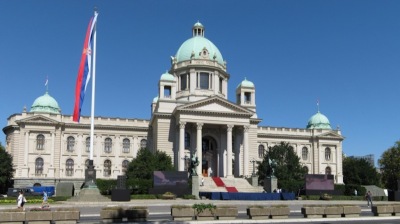 Several thousand people joined a march in Belgrade in support of Russia on the evening of March 4, as the country remains divided over the war in Ukraine.

Serbia’s government has spoken out against the Russian invasion and voted in favour of a UN resolution condemning the invasion and calling for an immediate cessation of hostilities and for Russian troops to withdraw. However, President Aleksandar Vucic previously announced on February 25 that Serbia will not be joining the western sanctions against Russia.

Demonstrators gathered at a monument of Russian Tsar Nicholas II in Belgrade then marched to the Russian embassy to show their support. Photos posted on Instagram by the far right Narodna Patrola (People’s Patrols) group of anti-immigrant vigilantes shows a large crowd moving through the streets waving Russian and Serbian flags.

“Let's support the Russian people,” reads a statement published on the group’s Facebook page ahead of the march. “Let's tell the [Serbian] regime that it will break its teeth on sanctions against Belarus and voting against Russia in the UN, the majority opposition and the NGO sector that Russophobia is a statistical mistake in Serbia!”

According to Reuters, members of Russia's Night Wolves motorcycle club, which have ties to Russian President Vladimir Putin, were among the protesters.

The support for the march highlights the problems Vucic faces ahead of the presidential and general elections on April 3, at which both the president and his party, the ruling Serbian Progressive Party (SNS), will be seeking re-election.

As an EU accession candidate, Serbia has been under heavy pressure to join international sanctions imposed on Russia after its unprovoked invasion of Ukraine. However, there are large swathes of the population that are sympathetic to Russia, not only because of the historical, religious and cultural ties between the two nations, but also because of Russia’s support during the Nato bombing of Serbia in 1999 and Russia’s refusal to recognise Kosovo’s independence after it unilaterally split from Serbia. When explaining the decision not to join sanctions on Russia, Vucic recalled that Russia was the “only country that did not impose sanctions against us in the 1990s” as well as its support for Serbia’s territorial integrity.

While the Serbian government has sought to maintain its balanced position, in the run-up to the invasion many media outlets in Serbia took a strongly pro-Russian line.

Earlier in the week, a smaller demonstration in support of the Russian invasion of Ukraine took place in the Montenegrin city of Niksic, attended by several dozen people. At the gathering, which was not officially supported by any political party, demonstrators held up a banner saying: “Serbia in Montenegro, Russia in Ukraine”.