With peace possible in Ukraine, some portfolio investors have decided that this is the time to get back into the Russian stock market. Inflows rocketed more than four-fold in the week ending September 12, with portfolio investors buying some $200m of Russian shares, according to the fund watcher EPFR. For some the risk-reward balance is tipping towards the reward end of the scale as the potential upside from buying super cheap Russian stocks outweighs fears of the situation in Ukraine getting any worse.

Politics between Russian and the West have never been as fraught as they are today, making pricing Russian stocks extremely difficult. That specific "Russia risk" that has always kept Russian shares priced at a lower multiple than its emerging market peers is a bigger factor than ever. So are these intrepid investors clever or foolish?

An oft-cited rule of thumb that appeared a good guide to  the market’s value in the past is "the fair value of the RTS is simply the current price of oil times 20."

This rule is far from perfect. In bad times the ratio of oil prices to the RTS index value has fallen into the low teens and in boom times it has climbed as high as 30. But the ratio has been much less volatile than the  RTS, which has swung about wildly.

At the time of writing, the RTS index stood at 1,192 and while the price of oil has recently dipped to $96 per barrel, this implies a fair value for the index of 1,920. On this basis Russian stocks look very cheap. 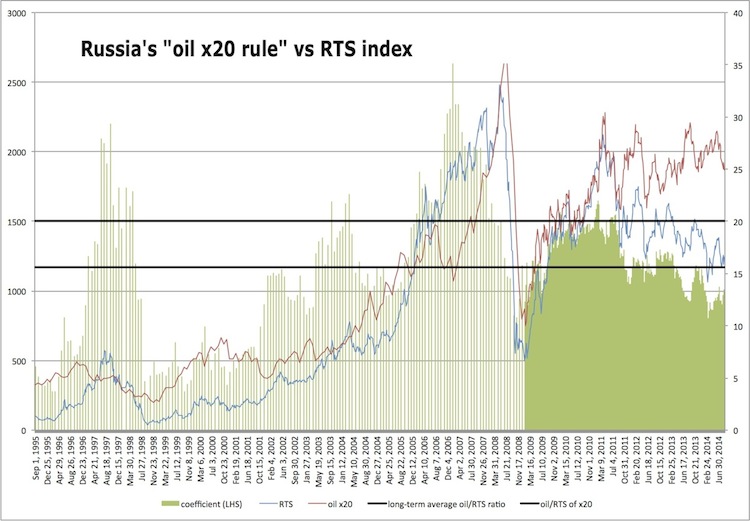 The oilx20 rule took a little while to establish itself after the market was set up in September 1995. In those days, with trading volumes counted in a few million dollars a day, a single investment could send the index spiking.

After Russian President Vladimir Putin took over as president in 2000, the price of oil began to recover and reached $25 that year, and the oil/RTS ratio remained bound in a range of 6-9. In the first two years of Putin's first term, Russia was reeling from the after effects of the 1998 crisis, but despite the gloom, the Russian economy actually grew by a record 10% in 2000. It was not until 2001 that the beneficial effects of devaluation became obvious.

In retrospect the 1998 crisis reset the Russian economy and laid the foundation for a boom that built steadily over the next eight years. Roman Abramovich piqued investors’ interest in the stock market as early as 1999 by taking over the PAZ bus maker by buying up its super cheap shares, and portfolio investors then moved steadily into the market. By January 2002 the oil price was $18.7 but the oil/RTS ratio was up to 15. These were the golden days of liberal reform and by September 2003 the ratio hit 20 for the first time, marking the start of what now are seen as the boom years in Russia.

Between 2003 and 2008 Russia's economy soared, growing by 6-8% a year. Foreign portfolio investors tumbled into the Russian stock market, the arrest of Yukos owner Mikhail Khodorkovsky and the nationalisation of Yukos not withstanding. The RTS was gaining up to 50% every year and everyone was making money hand over fist. Moscow was a party town.

The party was fed by the incessantly rising price of oil during this period that flooded the economy with cash, but despite the growing hubris, the oil/RTS ratio had sunk back to the low-teens for most of 2003-2005, only returning to 20 in September 2005, which probably marks the start of what former former chairman of the US Federal Reserve Alan Greenspan dubbed in the US context "excessive exuberance."

Again the chart shows a spike in the ratio to a peak of 35 in January 2007 after which fears over the unfolding subprime mortgage crisis in the US punctured the good mood. The oil/RTS ratio began to fall well ahead of the stock market and dropped once again to the low-teens well before the collapse of Lehman Brothers set the world on fire in September 2008.

During the euphoric period in the middle of the noughties the x20 rule worked very well. Oil prices fuelled enthusiasm as they rose from $100 to almost $150. The link between oil and the RTS remained in the range of x20-x25, although once again, as in 1997, the RTS got ahead of the x20 oil multiple.

After Lehman went bust that September the RTS went into free fall, dropping to a low of 492.59 in January 2009. However, interestingly the oil/RTS ratio was a lot more robust, remaining in the low to mid-teens for all of 2009. By the end of 2009 the RTS had recovered to 1,500, tripling the investment of anyone brave enough to buy in the black days of January, but more importantly by January 2010 the oil/RTS ratio was back at 20, even though oil was now only $77 a barrel, and stayed there until September 2011.

Looking at the chart something strange happened in the autumn of 2011, when the relation between the RTS and oilx20 broke and the two have since been diverging.

So what is going on? Obviously the "Russian risk" looks more risky than it has ever done since the end of the Soviet Union after Putin sent Russian  troops into Ukraine. Likewise, the Russian economy is barely growing as it struggles under the burden of international sanctions and its own failure to reform.

However, the oil/RTS ratio is still in the low to mid-teens and this relationship looks fairly robust. It implies that  following the 1998 crisis there are a lot more investors that remain committed to Russia and have put a floor on the market.

Indeed, if you average the oil/RTS ratio over the last 19 years since the market was founded, then the long-term average for the ratio is actually 15.61, not 20. Given that oil prices had dropped to $96 per barrel in September, this implies a fair value of 1440 for the RTS, which is also the top of the range in which it has been trading for most of the last two years.

So with the RTS at the bottom of this range at the time of writing maybe the intrepid investors are not so intrepid after all. If the market sticks to its form of the last two decades, it should rise another 300 points at least as soon as things get a bit calmer.