The fall in Russian inflation to 13.7% in September is bottoming out 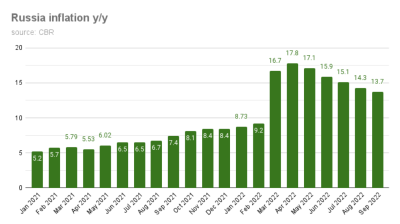 Inflation has been falling since April, but has now reached a bottom and could start rising again from here. / bne IntelliNews
By bne IntelliNews October 11, 2022

Inflation continued to fall in Russia in September, to 13.7% year on year, but at a much slower rate than in previous months. The recent period of strong disinflation is coming to an end and the central bank is likely to scale back the frequency of further interest rate cuts, Capital Economics reports.

Consumer prices rose marginally by 0.05% month on month in September, which was the first monthly increase since May. The y/y rate fell from 14.3% to 13.7%. (chart)

Non-food goods inflation eased at a much slower rate than in previous months, from 15.5% y/y to 14.9% y/y. In m/m terms, prices rose 0.15% which was the first monthly increase since April. The limited breakdown shows that the easing in y/y inflation in goods such as tobacco, detergents and cleaning products, clothing and construction materials came to a complete halt last month.

Meanwhile, services inflation actually edged higher, from 10.5% y/y to 11.0% y/y. This was its highest rate since 2015 as prices rose by 0.5% m/m. There were increases in inflation for education, insurance and passenger transport last month.

“Overall, the period of falling prices that Russia has experienced in the past few months has now come to an end as the pass-through from the strength of the ruble appears to have faded. This was supported by the latest weekly inflation figures which show that Russia has moved out of week-on-week deflation,” Capital Economics said in a note.

Analysts surveyed by RBC suggested that mobilisation could also have a deflationary effect, as it will suppress demand by introducing extremely high uncertainty for households.

Most recently, the Central Bank of Russia (CBR) has improved its inflation forecast, anticipating 11-13% annual consumer price growth for 2022 versus the previous forecast of 12%-15%, while still expecting inflation to return to a 4% target in 2024.

The CBR resolved to cut the key interest rate by 50 basis points (bp) to 7.5% at its policy meeting of September 16, marking a sixth consecutive cut, but slowing the pace of monetary easing in line with expectations.