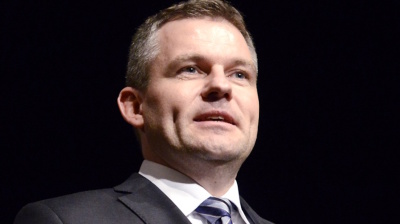 Former Premier Petr Pellegrini called on President Caputova to refrain from signing the DCA until the results of the opposition’s planned public referendum for DCA approval are ready,
By bne IntelliNews February 10, 2022

The Slovak parliament approved the Defence Cooperation Agreement (DCA) between Slovakia and the US on February 9. 79 MPs voted in favour, while 60 voted against, the Slovak News Agency reported.

The DCA was signed by both countries already on February 3, but the document was still waiting also for the parliament's approval. It will now be signed by President Zuzana Caputova, who sees Nato´s presence in Slovakia in the country's own interest.

It will allow the US airforce to use Slovak military airports of Malacky-Kuchyna and Sliac and potentially other facilities without a request of rental payment, for a period of 10 years. After this period, it can remain valid or be terminated with one year's notice.

In the past few weeks, DCA has divided Slovak politics and society amid the Russia-Ukraine conflict. It has faced growing opposition, especially from former PMs Robert Fico (chair of Smer-SD) and Peter Pellegrini (Voice-SD) who have recently intensified their anti-American rhetoric to attract new voters, while bringing back old ones. According to Fico, the DCA will allow Ukrainian insurgents to be trained in Nato’s eastern border with Ukraine, such as Poland, Romania and Slovakia, while the government claimed DCA is intended to strengthen military cooperation between both countries, stressing that it fully respects Slovakia’s sovereignty.

Both Foreign Minister Ivan Korcok and Defence Minister Jaroslav Nad denied that the treaty would serve as a prerequisite for a permanent presence of the US Armed Forces on Slovak territory.

"The support of the deal in parliament might be good news, but the circumstances that surrounded it are a caveat for the entire democratic political scene. It awakens us from the illusion that our place in the world is a done deal. It isn't. A great portion of society is confused, unable to orient itself and doesn't know why we belong to Nato and the EU," Korcok said, referring to obstructions by some members of the People's Party Our Slovakia (LSNS) of far-right Marian Kotleba and the Freedom and Solidarity (SaS) during the first day of house debate on DCA. The MPs blocked the speaker´s desk, carrying Slovakia's flag, while pouring water on the Ukrainian flag which was brought by the coalition MPs in support to Ukraine.

Pellegrini called on Caputova to refrain from signing the DCA, until the results of the opposition’s planned public referendum for DCA approval are ready, should it take place. Fico and Pellegrini also called upon the president to have the text of the deal examined by the Constitutional Court. At the beginning of February Caputova said that both Slovak and US interpretation statements on DCA are in full accord and thus it can be signed without concerns.

Pellegrini stressed fundamental objections to DCA sent at the beginning of January by the Prosecutor-General Maros Zilinka, arguing that the deal is disadvantageous for Slovakia. "Either the government is being pushed by someone to approve it immediately to meet the interests of the other contracting party, or, if the first option isn’t the case, this rush only confirms that the governing coalition is extremely scared of public moods and resistance," Pellegrini was quoted by the news agency as saying.

Zilinka came to the parliamentary session today to present why the DCA is disadvantageous for Slovakia, however, the MPs did not allow him to speak. As noted by Sme.sk, Zilinka called the agreement from 1968 on the stay of Soviet soldiers in Czechoslovakia more advantageous than the DCA.

Meanwhile, hundreds of people gathered in front of parliament building on February 8 to protest against the deal.